Out of the blue, my Blogger feed started to fill up with reviews for Snowpiercer. I'd never heard of it before but everyone's reviews were great and when I researched the film a little, the story behind it's release fascinated me, so I knew I needed to see it. I'm writing this while Jenna's on holiday so you'll see this after the hype, but still!

To be fair, the hype appeared to still be alive and kicking when I got back.  I hadn't even heard of this until seeing it on various blogs (gotta love the power of the film blogging community!!).  Anywho, I got on my latest flight and as soon as I saw this and I didn't even bother looking through the other menus! 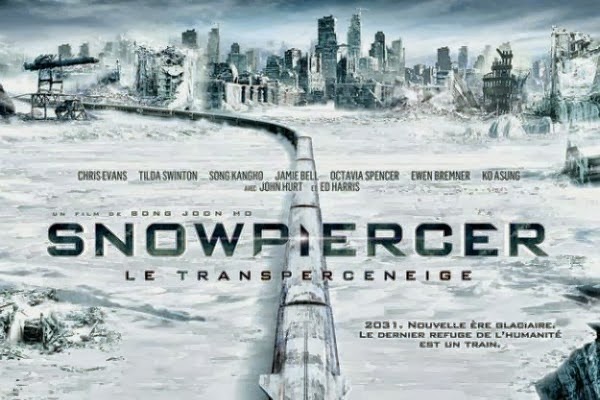 Snowpiercer is based on a French graphic novel called Le Transperceneige in 1982. The film itself starts in the present day, where an experiment planned to stop the Earth's global warming caused the whole planet to freeze, and wipe out all humans. The only survivors are on a high-tech train called Snowpiercer, and over the years a class system has formed where the wealthy live at the front of the train in luxury, and the poor are left to the slums.

It's been a while since I've been so gripped to a film just by it's plot summary. I knew when I read it that this film would be right up my street.  I knew nothing of what this film was about, honestly from the poster I thought it was a war film (I had avoided all reviews to limit spoilers) and to be honest I'm glad I did because I went into this with no expectations whatsoever. 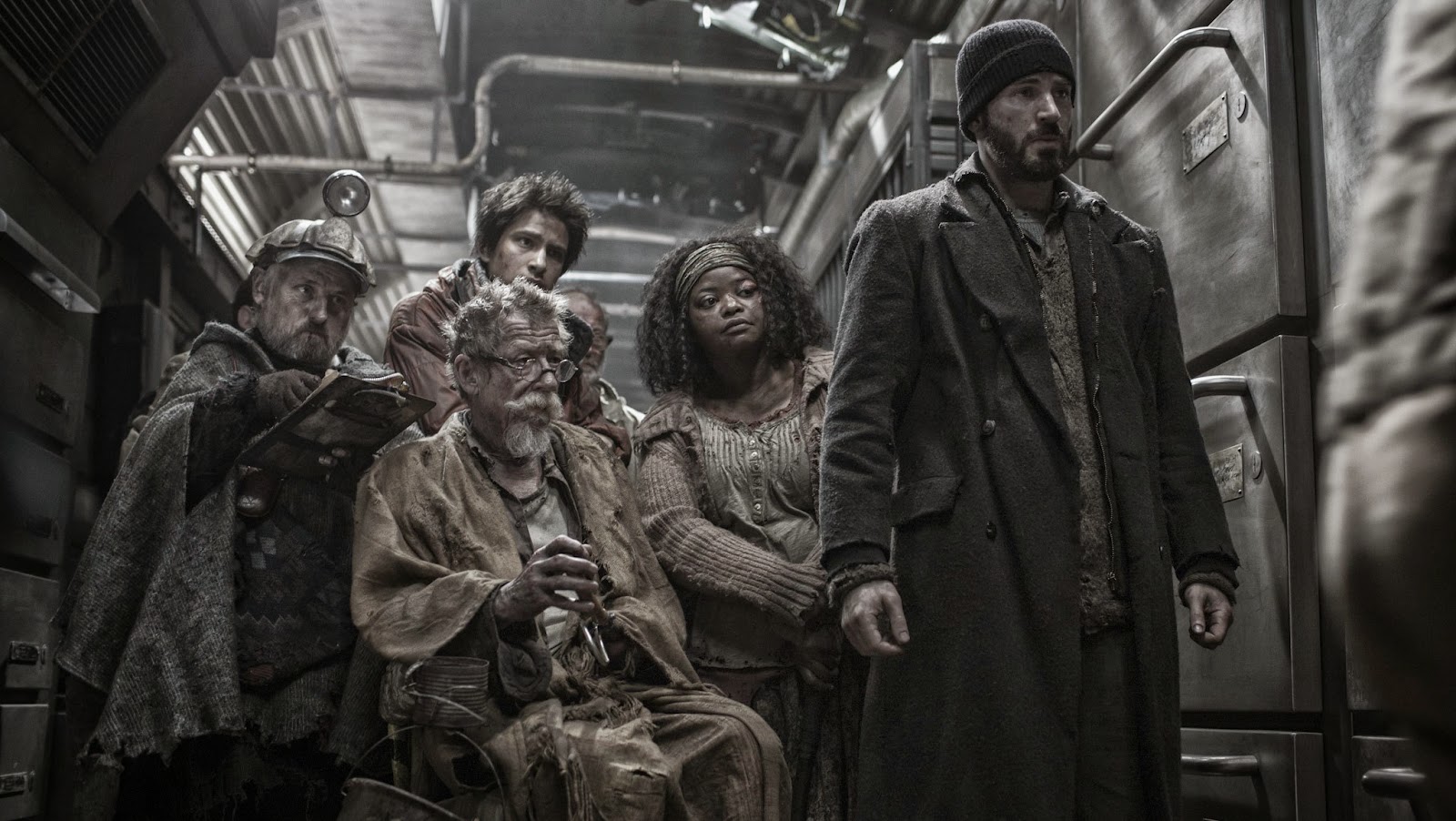 No surprises here, but I really struggled with the first 20 minutes of Snowpiercer. It just seemed to throw everything at me and I couldn't work out who was who, what was going on or what had gone on in the past that they were talking about, and I had to really sit and concentrate to understand the situation. That seemed to be a running theme for me actually, but as the film went on, a lot of my questions were answered.

I loved that it took no time at all to get into the story, within the first few minutes you could see this was going to approach to subject of social status.  The characters were amazing, Chris Evans was great in this particularly serious role and Tilda Swinton in (what probably shouldn't have been) a comedic role.  It took me most of the film to work out who she was because she looked so different!!

At the time I didn't realise Snowpiercer was based on a graphic novel, but if I did I would have appreciated the eccentric characters a little more, as they left me baffled when I was watching it. Minister Mason and Teacher were absolutely fantastic, and I'm not sure if the audience are meant to find humour in their characters but I laughed out loud during some of their scenes! 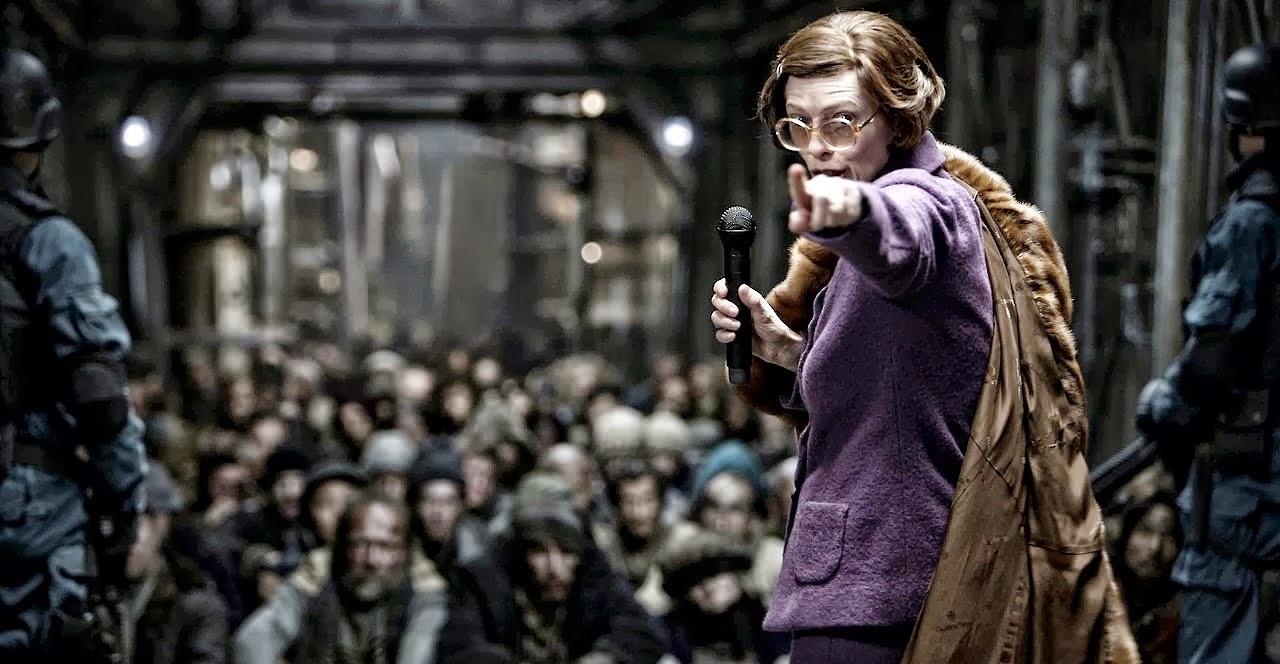 It was also refreshing to see Chris Evans play a more serious role, and he absolutely smashed it. In one of the last scenes, during his speech outside the door to the engine room, I really wanted to cry for his character.  Oh that scene got me fighting back the tears but also feeling a bit queasy!

The beginning of this film seemed like a typical action, 'fight against the man' type of film where you root for the lower class protagonist and instantly hate the 'leader'. But the more the film went on the more it started to become more political with more focus on the differences in social status and human nature in the world.  They have shrunk the worlds 'issues' down to one train in an effort to highlight these factors in much stronger ways, which in some parts became horrific (Curtis' final monologue) and other times extremely comical (Alison Pill's amazing singing teacher).  I actually found myself feeling a bit sad when the film had finished, it's much harder to ignore the social issues in our world when they are played out on such a small scale right in front of your eyes!

If you've never heard of Snowpiercer, check out the trailer below:

I'm so glad I gave this film a chance, and I want to watch it again sometime soon because I think I'll appreciate the creativity a lot more the second time round. I wouldn't recommend this film to the general audience just due to its complexity, but watching it was a truly unique experience.

I don't think I would want to watch this again, don't get me wrong I loved it but it left me with an uneasy feeling of how the world might end up, that I don't overly want to think about again.  Ignorance is bliss I say!