October is Halloweenie month here at Flick Chicks, the month that Jenna and I put on our big girl pants and force ourselves to sit through a few horror movies. You can read more about it in our announcement post here, and get involved if you’d like!

So this is the first is a long line of horror movies that me and Allie have promised to watch for Halloweenie, this was no where near the scariest we are going to watch and yet there were were hiding behind cardigans, cushions, hoodies and cats! We gave ourselves a choice between It Follows, Unfriended and The Babadook, and It Follows was the winner!

It Follows centres around what we named a "supernatural STD". After a sexual encounter, Jay (Maika Monroe) starts seeing people following her that no one else can see and they are trying to kill her.  Should she pass it on or try to stop it?

This was not what I was expecting, I thought it was going to be a teen slasher movie, Scream 2.0 but this was completely different. It had more of an indie feel about it and focused on really slow build ups rather than cheap scare tactics to entertain. I read afterwards that the idea of 'it' walking towards the camera makes it feel like a scary dream when someone is following you but you can't get away. 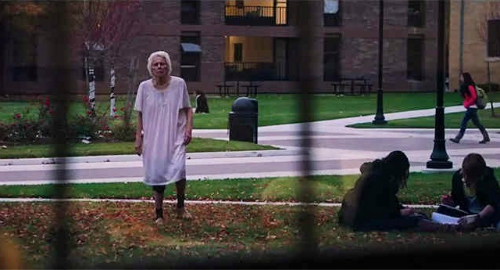 Jump scares are what keeps me away from Horrors, and it's so cool that It Follows only really made me jump once. From memory someone threw a rock at a window? I jumped a mile. The only other time I jumped was when Jenna quite literally punched me in the arm for no reason. Cheers mate!

However, it was the lack of jump scares that had me nervous the entire time. Those slow shots of a window, or open door, had me holding my breath and squinting, waiting for something to jump at me. That suspence barely lets up, and when you do let your guard down, is the moment the movie strikes with something horrifying. I'm just amazed, still. Is this what it feels like to love a Horror movie?

The whole film has a dream vibe about it, everything was so slow and calm (but terrifying at the same time). It made mine and Allies freak outs about every bathroom mirror, windows with curtains and closet doors seem ridiculous as there was minimal big 'jumps'.  I do need someone to explain the swimming pool scene to me and how they came up with that plan? Why did they think it would work? It baffled me? 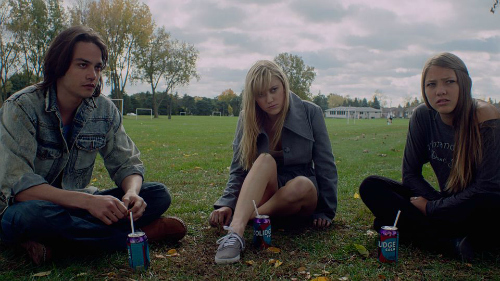 I have no idea how we are actually going to watch the real jumpy horrors after the state we were in after this. Allie kindly walked me to my car (because I had lots of stuff not because I was scared!!!) And the first person we saw we looked at each other and said "you can see him right" - crackpots! This part is true, whenever Jenna comes to my house she has enough stuff with her to move in with me for the week. I'd imagine we terrified that poor guy though, wondering if he was real or not!

I've spent every day since questioning anyone walking slowly, I feel the need to nudge someone nearby and ask them if they can see that person too.

Oh, and if you're looking for a second opinion, why not check out Courtney's review over at On The Screen Reviews. This was creepy timing, just as I'd finished polishing off this post, Courtney emailed me looking to join in on our 'Halloweenie' activity and sent me a link to her review of It Follows! Weeeeiiiiirrrrrrd! Thanks Courtney...now can anyone else see that person outside? No?
Posted by Unknown at Wednesday, October 05, 2016
Labels: 2014, David Robert Mitchell, Halloweenie, Horror, It Follows, Keir Gilchrist, Lili Sepe, Maika Monroe, Mystery, Review