I actually watched this on a plane, I can confirm for certain that it is NSFP!!!  As it was on the movie listings on the plane, I thought 'how bad could it be??' It was bad and it got worse, I was in a world of my own watching the film and all of a sudden this face appeared in front of me and it was a steward asking if I wanted a drink.  So I paused the film, only to realise it was the scene where Zac Efron lies across the toilet naked to go to the loo, then the guy next to me wanted to get out to go to the toilet so I couldn't play again.  I felt like everyone was staring at me and I must have been the colour of a beetroot. 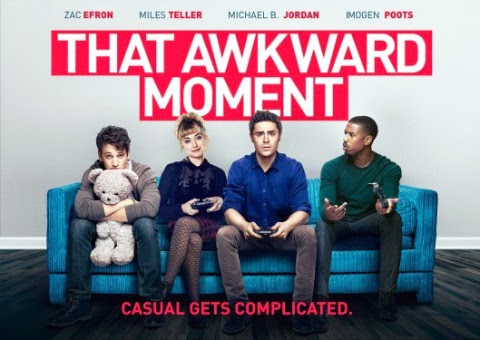 That Awkward Moment follows three best friends who, after Mikey (Michael B. Jordan) finds out his wife has been having an affair, choose to make a pact to stay single.  Things start to get more complicated when Jason (Zac Efron), the serial singleton, meets the girl of his dreams. 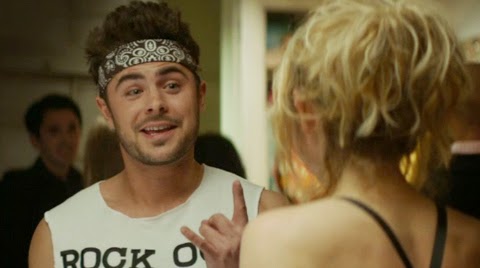 This is a typical American comedy with stacks of sex and toilet humour (sometimes both, see above!) and gross out gags galore.  However, it still made me laugh, there is a scene around the middle with Jason and Daniel (Miles Teller) in a sex shop that literally had me howling with laughter (which is pretty impressive on a plane when you consistently fight the urge to laugh/cry/shout at the screen at all costs).
That scene was brilliant, I also loved the 'dress up' party scene - 'Rock out with your c*ck out!'. I have to say that after this and Bad Neighbours, Zac Efron has done well to shake that High School Musical image away from my mind.
I absolutely fell in love with Jason and Ellie (Imogen Poots). Both me and Jenna are suckers for a good love story and theirs was just adorable. One of the final scenes with them at the book reading was my absolute favourite, I was smiling from ear to ear! There are some awkward moments in the film (should have expected it really) that make you cringe so badly that you desperately want to turn the film off but no you don't because all of a sudden that awkward situation becomes quite funny.  The film plays the rom-com cards from the male perspective, which although has been done before, is quite refreshing.
I would say that although there are plenty of funny (and awkward!) parts in That Awkward Moment, it most definitely leans more towards the romantic side of the romcom, which I actually enjoyed. The plot isn't completely predictable either, as I boldly claimed 20 minutes in I knew how it would end, and I wasn't completley right.

The rom-com that both men and women will enjoy, bit too much toilet humour for my liking but would definitely watch it again.