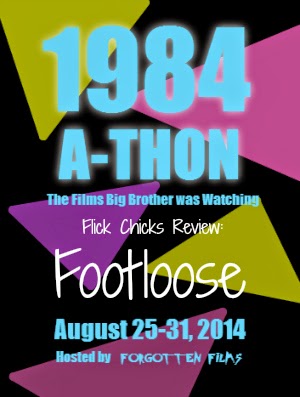 What seems like forever ago, Jenna and I received our first non-automated email in our Flick Chicks inbox from Todd at Forgotten Films, inviting us to take part in his 1984-a-thon. We both jumped at the chance and Jenna quickly snagged up Footloose for us, which was a great choice.

I have been meaning to watch Footloose properly for years and this meant we completed another Blogathon and covered a film on the Top 250 - win win!

I knew the film of course, and the song too, although I don't know many of the lyrics and tend to just sort of make them up. This was a great opportunity to watch a classic film for the first time, and also an excuse for Jenna & I to meet up as we haven't for ages!

For anyone who really doesn't know what Footloose is all about, a teenager raised in the city called Ren (Kevin Bacon) moves to the small town where popular music and dancing have been banned after a tragic incident years ago. Ren struggles to fit in at his new school, and also lands himself in a heap of trouble as he tries to shake up the rules. 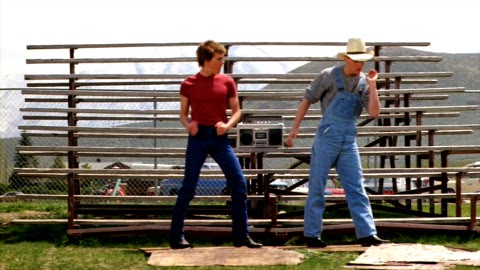 As I suspected, Footloose was full of cheese. The group dance scenes in particular, where everyone in the group seems to know the same routine, and they're all in perfect synch. Those moments were great though, and you just can't help put smile and tap your feet along with the songs. My favourite scene is captured above, where Ren teaches his friend how to dance. He's just hopeless but it's a great comedy moment.  This was by far my favourite scene and probably the only point I really smiled in the film.

I think I may have enjoyed this more if I'd seen it back when it was new (difficult though being born in 1985), I just found it a little too cheesy and hard to watch it some places.  A point both me and Allie said at the time and have mentioned here is John Lithgow, I love him in everything I have seen him in, until now!  His long winded scenes put me to sleep, they were so boring, it was lucky this was a Flick Chicks movie night or I may have turned it off at one point.

Kevin Bacon's Ren was exactly what I expected, great!  He has charisma, the moves and was the highlight of the film.  Shame as much can't be said for Ariel, the preachers daughter, played by Lori Singer.  Singer may be a good actress (I haven't seen her in anything else to judge) but the character was horrid, she was a spoilt brat who always gets what she wants and I didn't buy into her as the love interest at all.  I would be surprised if anyone liked her let alone fell in love with her.  Sarah Jessica Parker's Rusty would have made a better lead in my opinion! 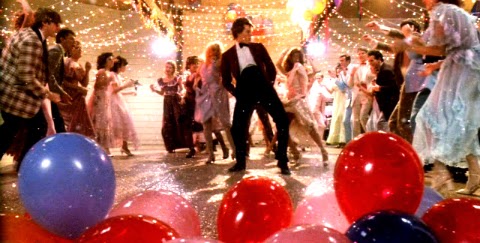 For me, the only real thing that let the film down was John Lithgow's character, Rev. Shaw Moore. His scenes had far too much dialogue and I lost interest in his scenes very quickly. All in all though, Footloose was enjoyable to watch and I'm glad that Jenna chose us for it.

It's definitely the classic that is expected and had I not been annoyed at the preacher and the preachers daughter in every scene they were in, I would have probably scored it higher!

Thanks to Todd at Forgotten Films for inviting us to take part in this huge blogging event, it's been brilliant to see all of the entries that have been flooding in this week and I hope we can take part in something similar again in the near future! Ditto ;-)
Posted by Unknown at Saturday, August 30, 2014
Labels: 1984, Blogathon, Drama, Footloose, John Lithgow, Kevin Bacon, Music, Review, Romance, Sarah Jessica Parker