Last year, me and my little brother went to see The Purge together. It was a strange trip, because we never go out just the two of us, and he'd just passed his driving test so he drove us there! An experience just as scary as the film actually (sorry if you're reading this Rich!). Anyway, we're a big fan of tradition in our family, so we went to see The Purge: Anarchy together. I drove. Safety first!! 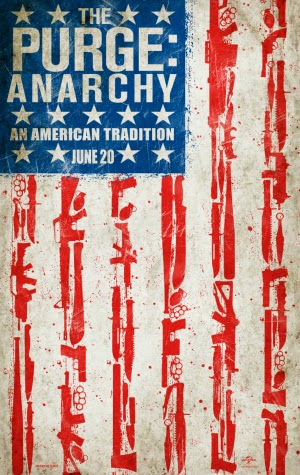 The Purge: Anarchy is a sequel that isn't a sequel. You don't have to watch the first film to see this. It follows the same principals as the first but follows a completely different set of characters.

I saw the first Purge film and was seriously disappointed, I was hoping for a U-turn on the generic horror genre that seems to be around at the minute but nope.  It turned out to have the same cheap thrills and disappointing tension building moments that amounted to nothing (paranormal activity-esque).  Therefore, I haven't seen Purge: Anarchy and I don't think I will see it so my opinion here is useless... Over to you Allie...

In the first Purge film, the story followed just one family, but Anarchy follows 5 main characters who end up sticking together to stay alive. I like this change as it means there's a lot more going on, and the film doesn't have to resort to silent suspense as often. The first few scenes introduce our main cast: Eva and Cali, two sisters who struggle to get by each day, Shane and Liz, a recently broken-up couple whose car breaks down at the most unfortunate time, and Sergeant. We get to know very little about Sergeant other than the fact that he is out to purge, but he doesn't seem like a bad fellow.

One of the things I loved about Anarchy was that it was much less of a horror, and more a thriller. I hate it when films are filled with suspense for no reason other than to make you jump, and there's much less of this in the sequel. In fact, the silent, tense moments tended to be nothing at all, and then something would happen straight after that would make me jump!

There was definitely a more sinister feel to The Purge: Anarchy. It's awful enough to think that people would go out and 'purge' on the night anyway, but there are several indicators of foul play by the Government here. If anything, it's a little like the Hunger Games, where the Gamemasters intervene if things aren't going their way. At the start of the film, Cali has been following video updates by a Purge activist called Carmelo, who has a bigger role as the film progresses. This leads me to believe that we can expect a third film in the series in the near future, all to do with the people rising up against the Government.

I thought the cast was great in this film, even though I had never heard of any of the actors before. I really wish they had cast Manu Bennett as Sergeant though, that would have been amazing. There wasn't a weak link in this group, not even the typical dumb character thrown in just to get killed off instantly. Every member has a role to play.

Although far from perfect, I really enjoyed this sequel and I'll definitely tune in for round 3 if my prediction is correct. The Purge: Anarchy is a huge improvement on the original and well worth a watch in my opinion.