You'll know by now that although I have a few Marvel graphic novels knocking around, I'm more of a DC girl. Understandably then, when I first saw the trailer for Guardians of the Galaxy, I had no idea what was going on. I watched this film the other night mainly because I felt I had to; the trailer didn't excite me at all to be honest.  This is weird, because I don't have any graphic novels lying around and the trailer for this had me jumping up and down in my seat, so when I realised it came out while I was in the US on holiday, I had to find the nearest cinema (and lucky for me it was an IMAX!) - Happy Jenna! 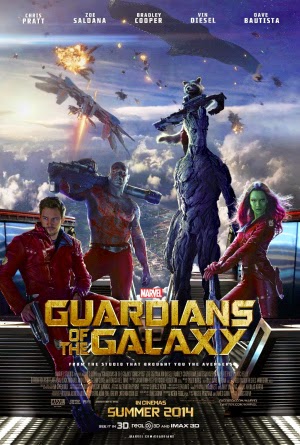 So, if you've been living under a rock and don't already know what's going on here, Guardians of the Galaxy is about an odd bunch of outlaws who eventually form a team who try to save the world.
The team is formed of leading man Peter Quill/Star Lord (Chris Pratt), Gamora (Zoe Saldana), Drax (Dave Bautista), Rocket the racoon (voiced by Bradley Cooper) and loveable tree, Groot (voiced by Vin Diesel).
I want to just say right now before I continue that I really did enjoy this film, so anything that I whinge about is purely me being picky. I find it much easier to pick out flaws in films I enjoyed for some odd reason.
The film opens to your usual comic-book scene, a heart-breaking family tragedy. Seriously Marvel, can you stop it? Five minutes into this film and I'm crying, I was sold an action packed space film with a bucket load of comedy! A few tissues later though and we're into the story that ties our 5 heroes together.  Ditto, I was in tears, as you all know I am a sucker for a sob story so it didn't take much!!

I loved the little introduction scenes, but Rocket and Groot just owned every scene they were in. Sorry Star Lord, but you really weren't the leading man here. Where did Groot come from though? We got a backstory for everyone but him. I guess we wouldn't have understood it anyway, as all Groot says is 'I am Groot!'. Which provides many laughs throughout the film actually.

My favourite was by far Rocket, his sarcastic humour and general presence stole every scene, maybe a first for Bradley Cooper?!  Still no entirely sure why they used a high profile (probably expensive) actor to voice Groot when he had a total of 2 lines?!  Any ideas?  And Peter Quill, Chris Pratt where have you been hiding all my life (I think it was under a layer of pudginess) this man is beautiful and funny - swoon!!!
We also get introduced to our film's main bad guy, King Thranduil Ronan the Accuser, who wants to destroy the galaxy. I'm not too sure why, to be completely honest, but let's face it, he needs to be stopped.  I hadn't even noticed this until you mentioned it, but there is no real back story as to why this guy wants to destroy the galaxy and himself, but hey ho, every superhero film needs a bad guy!

This film was simply beautiful to watch in terms of visuals, it really was. The action scenes in particular were amazing and I wish I had seen them in IMAX. The humour just never stopped either and I think it'll still be just as funny when re-watched, especially that prosthetic leg moment! Considering I had no expectations whatsoever, I was really pleased in the end. Only one moment made me groan, which was the *spoiler* 'I hope he doesn't realise I switched the real artefact with this completely identical fake one I somehow obtained!' part. But only that moment.  Actually, I had a bone to pick with the ending as well: Why did this artefact that can destroy entire galaxies not kill Star Lord, why is he so powerful?! Thoughts?

I found this film to be an experience, for a start it was a live action movie that I actually enjoyed in 3D (this is extremely rare with me and I've discussed 2 in the last week!) but also because I didn't go in with any expectations.  With the likes of Superman etc as I know the stories and the backgrounds, I expect them to be good.  I knew nothing about GOTG, therefore I had nothing to base an opinion on, I think because of that I enjoyed it so much more!  The 3D didn't make any of the action scenes difficult to watch (which is my usual peeve) and it made some of the flying scenes look incredible, especially in IMAX.

The comedy was the best part by far, Rocket and Groot were hilarious but they also skipped out of any cheesy or awkward moments by throwing a joke in.  This is so different from the other comic book movies I've seen where they love their cheesy, love in moments.  In fact, the only real serious moment I could think of (Peter and his gift) finished with a comedy twist.

The characters all seemed to get the right amount of airtime and enough back story to make you care about what happens to them, which is impressive with five lead characters (although one is a tree!).  I think I heard there will be a sequel, I hope there is but now I will have expectations so they will have to step it up a notch!
I don't know how to rate Guardians of the Galaxy. I'm under strict instruction not to give out half-points, in fact I had to argue out of having a 5 star rating system, but I'm sat between an 8 and a 9. It was better than 8 for sure, but I've seen better films that I gave a 9. Ugh...I'm going to stick with an 8, and maybe change my mind!  Sorry but I just think 1-10 is enough, half points just make it that much more complicated! And if you keep moaning we will go back to 5! ha!

This would have been a 10 except for my one annoying gripe (see above, spoiler in grey!) which knocked it down to a 9!