Anna Kendrick turns 29 today and I thought it might be nice to share with you all my Top 5 Anna Kendrick films. I first saw her in the Twilight series back in 2008 and since then she just seems to have popped up in loads of other films I've seen! 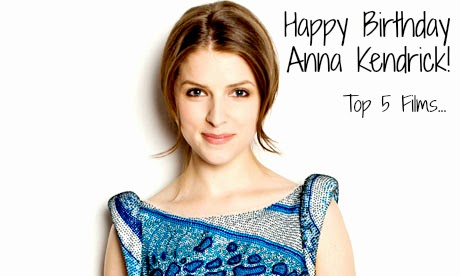 Anna hasn't actually been in an awful lot of films if you take a look through her filmography, but she has an awful lot coming up in the next 2 years so my Top 5 list could well look completely different by then.

Yeah, yeah, I know, it's Twilight. But this is the first time I ever saw Anna, and I think she played her character really well, and stayed true to the book version. Plus, her graduation speech Twilight Eclipse was brilliant, and made me cry a little. Not that it takes much to make me cry!﻿

End of Watch makes my list purely for the scene with her and Jake Gyllenhaal singing in the car. It was just so natural and I think Anna's natural charm really shined during the scene. I don't know how true this is, but I heard that the song just happened to be playing anyway and the scene was completely improvised. Cute if true!

I wasn't a huge fan of 50/50 to be honest, but Anna's character was just so down to earth that I mainly enjoyed it just for her. Although her character is very similar (I think anyway) to her character in Up in the Air, the completely different topic kept it fresh for me.

As someone who gets to travel a little for work, I really appreciated Up in the Air and I just loved how it didn't follow a predictable plot. Anna played the role of a some what cold, by the book professional really well, a role which I don't think reflects her true personality at all.

I'm a human of the female variety, it's just in my nature to love Pitch Perfect, sorry! Just everything, from her dress sense, her non-cornforming attitude to her singing just had me smiling throughout the whole film. If there was ever a film on my life (highly doubtful, and a box office flop if so), I would love Anna Kendrick to play me!
What's your favourite Anna Kendrick film?
Posted by Unknown at Saturday, August 09, 2014
Labels: 50/50, Anna Kendrick, Birthday, End of Watch, Pitch Perfect, Top 5, Twilight Saga, Up in the Air