I have been meaning to watch this for a while as I thought the trailer looks quite funny and I noticed Rebel Wilson so I thought, this must be good! This is actually the true story of Daniel Lugo (Mark Walhberg), a bodybuilder who decides he wants to be a 'doer' and to do this he decides to kidnap a rich client of his to get him to sign over all his assets.  He ropes in Christian teetotaller Paul Doyle (Dwayne Johnson) and steroid junkie Adrian (Anthony Mackie) to help him on his mission to 'get what he deserves'

This has been on my list for a while so once I saw Jenna had watched and reviewed it, that was my kick up the bum to get on with it! 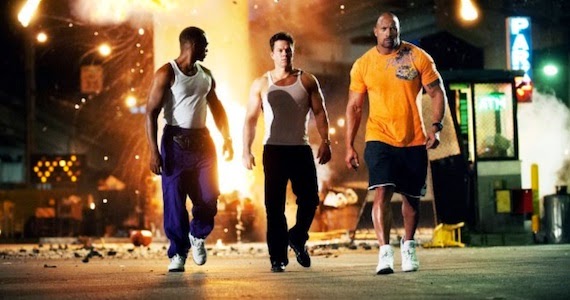 This film is really funny, in an odd way, you can't think too much about what your watching and if you try to remember its a true story it actually becomes quite hilarious to think that three guys actually got themselves into this situation! The dialogue is cheesy and the story seems far fetched but that adds to the entertainment. Rebel Wilson was completely wasted, her limited screentime left you wanted to see more of her and disappointed that you didn't!! The voice overs throughout the film although comical become a little annoying towards the end and drag on a little but the freeze frame scenes and general tackiness add to the disbelief that this is a true story (but it is!).

Gah, I really struggle to say what I think about Pain & Gain. The first half was pretty good actually, sure it was a little farfetched, but it was still interesting and a little silly. But after a major turning point which I won't mention, it just went a bit too far for me, and all I could think about were plot holes which my mind normally happily forgets about. It also dragged like crazy! I paused to go to the loo at what I thought was about 20 minutes before the end, and realised there was still an hour to go. Ouch! I would recommend this to someone looking for a cheesy film to watch when they have nothing else to do.

Dwayne Johnson was the highlight for me, and well, take that however way you want to. Pain & Gain isn't a film I'll watch again in a hurry, but if you've got an interest in it anyway, don't let us put you off and give it a go.