Oh boy, I hope I don’t make a habit of watching movies about terrible parents. A couple of weeks ago I watched Hungry Hearts (2014), a movie about a terrible mother who refused to feed her baby anything other than oils and vegetables, and it was awful. The movie itself was okay, but it was heartbreaking watching something like that, even knowing it was fiction. So of course, when I heard about Tallulah (2016) and read a few reviews, all positive, and then discovered it was available on Netflix, I had to give it a try. Plus I love Ellen Page!  Gosh that Hungry Hearts sounds awful, I don't think I could watch it to be fair!  There was some confusion with this as Allie thought I had recommended it to her so when she asked me about it, I was completely confused until she realised it wasn't me at all.  However, it did peak my interest so I parked myself with a glass of wine and Netflix! 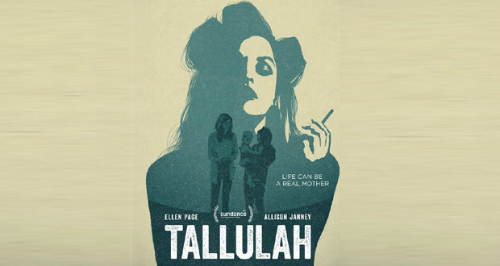 The movie tells the story of 3 struggling women. Tallulah (Ellen Page) is a drifter, living out of her van with her boyfriend Nico (Evan Jonigkeit) and has dreams of travelling to India. One night, the living situation becomes too much for Nico and he leaves to go back home to New York to see his mother. With no money or food, Tallulah drives to New York to find Nico, scavenging food from left-out room services in hotels. This is where she meets Carolyn (Tammy Blanchard), AKA runner up for the Worst Mother in the World award.

Carolyn is out of her mind, clearly. Her husband isn’t aware that she’s galavanting out and about and she’s determined to have a good time, and to do so, she has no problems at all hiring a complete stranger to babysit her 1 year old daughter while she goes out to party. This scene was the only one I really didn’t like. Watching Carolyn rant and constantly ask Tallulah if she looks pretty just got far too uncomfortable for me. Eventually, Carolyn returns home horrendously drunk, and that’s when Tallulah takes the baby to sleep in the van with her to keep her safe. 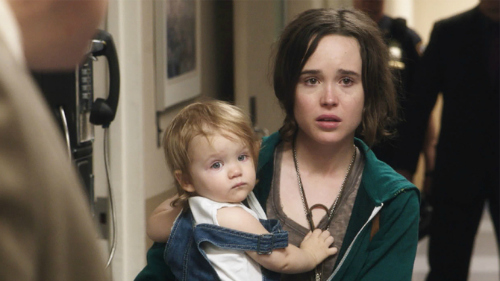 The next morning, Tallulah goes to return the baby, but nopes the hell out of there when she spots no less than 5 police officers in the hotel lobby. And so begins the game of her just making the situation worse with every given minute. I honestly didn’t know how to feel at this point, I mean, is it still kidnap when she’s just doing what’s best for the baby?  I found it so hard to watch, I was just willing her to admit to what she had done so she could take her back, I was on the edge of my seat the whole.  The problem was I wanted Tallulah to tell the truth so badly just so that Margo wasn't let down again.  I felt like she was one of those characters that just keeps getting knocked down just as she is getting back up and it broke my heart.

Our 3rd leading lady is Nico’s mother, Margo (Allison Janney). I love this woman. Poor Margo is lost in life. Her husband came out as gay, cheated on her and now has a happy life elsewhere, her son left home on bad terms, her turtle just died, and a very unexpected visitor has arrived on her doorstep. I’ll let you watch the movie for yourself to find out who, and why.

I wanted so badly to be mad at Tallulah for what she was doing, but I just felt such a strong connection to her, it was impossible. She had such a horrible upbringing herself that she couldn’t just walk away and let that happen to someone else. What would you do in that situation? I honestly don’t know what I would do. The story had me gripped from start to finish, and I had no idea what direction it would head in, or how it would end. My husband was giving me funny looks across the sofa as I was wailing ‘this isn’t going to have a happy ending’ over and over again.  I was totally on the edge of my seat, wailing at the TV, it all just got  too much and I had to pause for a cuppa (totally British, nothing in the world that can't be solved with a cup of tea!).  I wanted everyone to have a happy ending.

The performances all round were absolutely amazing, and as much as I love Ellen Page Allison Janney was the MVP for me here. It was the little qwirks in her character that gave me the much needed comical relief every now and again. Plus it was lovely to see some of my favourite faces (Zachary Quinto, Uzo Aduba & David Zayas) pop up for their small roles. Highly recommended! In fact, I made Jenna watch it the very next day after I did!

Ellen Page just wins everything for me, she is such an amazing actress and in this when you knew what the character was wrong in what she was doing you still wanted to reach out and help her.  It takes serious skills to pull of a character that no matter how bad their behavior, you are always on their side.  Alison Janney is one of my favourite female actors and these two together was just awesome, they need to do more work together....like now!