Monthly Round Up + Links: September 2016

As I type this post, whilst tweaking my cinnamon loaf recipe, I can't actually believe that it's October tomorrow! Normally, we post a Trivia Round-Up on the last day of the month, but honestly? That was starting to feel like a chore, and I've been looking for a way to share links to my favourite posts of other bloggers, and so we're trialing a different kind of Round Up post!

This month has been pretty slow for movie watching, for me anyway. Being a movie fan and a gamer sucks up a lot of time, and I'm still burning a couple of hours a day on World of Warcraft. I managed three cinema trips though, a Flick Chicks catch-up to see Bad Moms, a girls night out to see Bridget Jones's Baby, and a mid-week treat to see Swiss Army Man. I'm still trying to gather my thoughts on that last one.

If you've missed any of our reviews this month, you can find links to them all here: 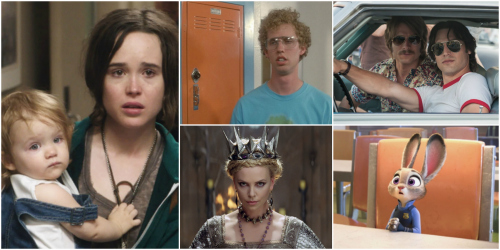 I've also got stuck into quite a few TV shows this month. I'm almost half way through Stranger Things, which I'm loving, and some of my favourite comedies are starting up again. One show I've caught up on and reviews is Wayward Pines, which is well worth a watch, and you can check out my review of it here. Don't worry, it's spoiler free!

Mid-September brought the birthday of one of my favourite actors, Tom Hardy. To celebrate the occasion I made a Top 5 List of my favourite roles of his, which you can read here. Quite a few of you mentioned roles of his from movies I haven't seen yet, which I'm planning on watching soon!

Also, the start of October brings the start of Halloweenie Season here at Flick Chicks! You may already know that we're huge babies when it comes to horrors, so we're trying to watch and review as many as we can in that month. Check out the announcement post here, and join in if you like! We have reviews's for The Human Centipede and It Follows on the horizon.

Last but not least, I want to share some of my favourite posts from our fellow bloggers. Check these out!

Those Assholes Watching Movies have been covering TIFF and got to see La La Land, which us Brits have to wait till January for. So jealous!

Margaret's Cinematic Corner is the place to be each Friday for all your movie news needs, and for the whereabouts of her J-Boo, Jared Leto. Seriously guys, she's converting me.

Kevin at Speaks in Movie Lines is the first person to get me interested in a Western, with his review of The Magnificent Seven.

Ruth at FlixChatter reviewed Florence Foster Jenkins. I scoffed at the trailer, but Ruth's words convinced me to give it a try, and I was so glad that I did!

Jordan at Epileptic Moondancer reviewed Nerve, a movie I'm not gutted I missed at the cinema. Patiently awaiting a DVD or VOD release now!
Posted by Unknown at Friday, September 30, 2016
Labels: 2016, Halloweenie, Links, List, Review, Round Up