You might remember this from my looking forward post, I was really looking forward to it. Ab Fab was heavily present in my childhood, if we weren't watching it my Mom was quoting it trying to make me laugh.  So I was super excited about a new story and seeing where the likes of Edina, Patsy, Saffy and Bubble ended up. 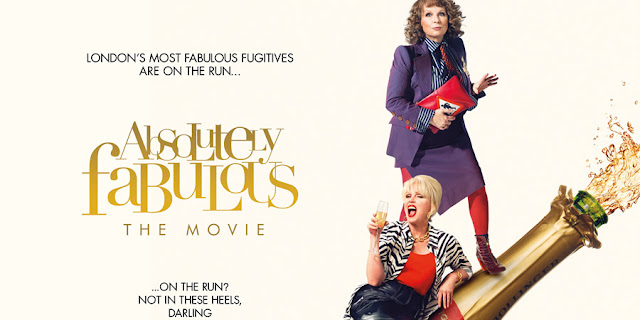 The new installment in the Ab Fab saga, sees Edina (Jennifer Saunders) trying to get Kate Moss on her PR company but inadvertently knocks her into the Thames starting a enormous man hunt! Hated by all of London, Patsy (Joanna Lumley) and Edina decide to go on the run to the South of France until the chaos dies down.  Then it gets even more ridiculous.....

First and foremost, this is 90 minutes of my life that I can never get back but admittedly the 20 minute nap I had around the middle was decent enough.  There were a few moments that made me laugh a little but the story was so bloody boring that I couldn't keep my eyes open. It actually started off pretty well with the dynamic duo waking up after a heavy night and a particularly comical recovery session in the bathroom mirror!!  Once it gets to the trip to South of France it becomes utterly ridiculous and not funny in the slightest...I was so disappointed!

A bonus however was the cameos, it was like watching A million ways to die in the west again but if i'd have hit Lou everytime I spotted one like I did with Allie in that one she would have had no arm left!  It was one after the other, I couldn't keep up and I guarantee I missed a lot!  I need to find a list online to find out exactly how many cameos there were.


I have to admit his isn't really a review as much as a moan about my disappointment at the film in general.  Don't take my word for it though because lots of people in the cinema seemed to love it!!