Back in 2010, Universal Pictures gave us an animated film that many never expected to love as much as they did. Three years later we were given a sequel, which failed to wow but certainly reminded us just how much we love Despicable Me. Fast forward to the present day and Gru’s minions are everywhere. They’re on pajamas, sweets, bedspreads, and now they even have their own film. I got the pleasure of watching Minions the way I think it should, with a kid by my side. Who said babysitting your brother had to be boring? 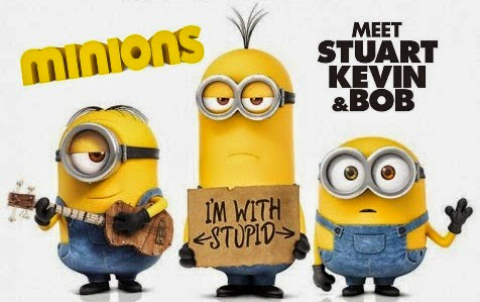 Minions is a prequel of sorts to Despicable Me, and tells us the story of how the minions came to be, and what they did before they found Gru. The story itself focuses on three main Minions, Kevin, Stuart and Bob, as they leave the rest of their pack (group? What’s the collective term for minions anyway? swarm? gaggle?) and try to find a new boss. Their journey leads them to Villain Con in Orlando, where they meet Scarlet Overkill (Sandra Bullock) and do everything they can to impress her.

The start of the film was painfully slow, and although the narration was needed, it felt like I was being read a children’s story and I felt quite bored.  I loved the beginning, although I had seen a lot of it in the trailer but I still loved the story telling and the narration. Once the minions arrived in Orlando though, the pace picked back up and the rest of the film was enjoyable.  I  did however get a bit bored in the middle but luckily my 2 year old niece didn't "Aunty Jenna, loooooooooooook" *points frantically at the screen* It did suffer I thought from the age-old issue of all the funniest moments being in the trailer. 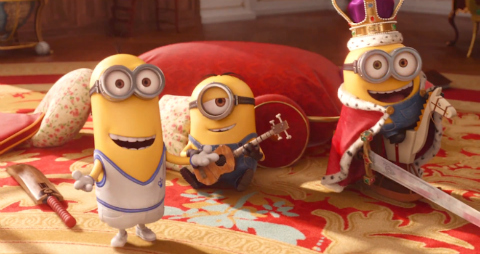 There were two main things I loved about Minions. One was of course the little yellow cuties themselves, but with them being the main characters this time, we got to hear a lot more of their own language, which derives from languages from all over the world (and Bananas), which now makes sense after the introduction to the film. There are moments where I was begging for subtitles, but for the most part you can tell what the little guys are trying to say. I think its more about the body language and the actions to understand what they are saying, I still love the scene with Stuart and the yellow fire hydrant...."Ello papagena...."

What got the most laughs from me was the British stereotyping. I feel like I should be mildly offended? Like I want to assure people that our policemen do not drink and drive (tea from china cups that is) and we don’t all cry ‘blimey!’ when we’re distressed! We do drink a lot of tea though...I type this whilst drinking tea so it must be true, ha!  I too am drinking tea but not driving at the same time but it does explain why the UK area of Epcot in Florida looks the way it does!

I loved this film (excusing the brief boredom around the middle), but I only ever remotely enjoyed Despicable Me 2 because of these little guys, the rest was a waste of time.  I thought it was as good as Despicable Me and really made me laugh out loud and made my niece squeal with delight (which always makes my day!). 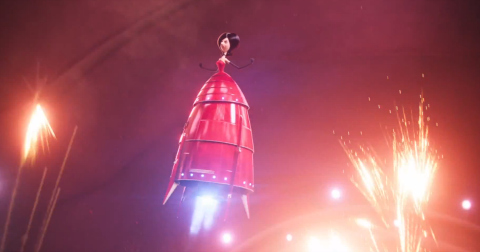 Minions wasn’t as good as good as the original Despicable Me, although the ending made me squeal with glee (I won’t spoil it) and I’d rank it on par with Despicable Me 2. It’s a good film, don’t get me wrong, but I think Minions appeals to a much younger audience.  Maybe I have a lower mental age than you?!