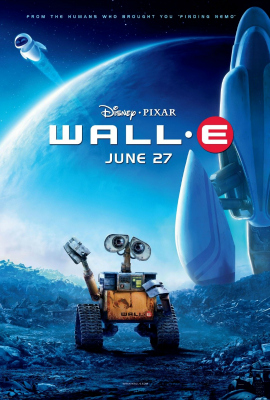 Despite my undying love for animated films, every now and again, one slips through the net and it takes me ages to get round to watching it. It was just last year that I watched Up (2009) for the first time, which is bad enough, but one film I’ve been putting off for far too long is WALL·E. It seems to have cropped up again in the blogging community thanks to some blogathons, and that gave me the final push I needed.

The film is set in a waste-filled future, where the situation became so dire that mankind has fled the planet on a giant cruise-ship, whilst waste collecting robots clean the planet up. Hundreds of years later, the plan seems to have failed as one little robot and his cockroach friend seem to be the only ones left on Earth, until one day a ship drops off a robot named EVE to scan the planet for signs of life.

That little plot summary is something I wrote after watching the film; I watched it the other night without reminding myself what it was actually about. The first 20 minutes or so really took me by surprise as it introduced this almost post-apocalyptic scene, and I began to wonder whether this was really meant to be a family film after all. The scene where we are introduced to WALL·E’s little bunker really tugged on my heart strings. I saw this one later than I normally would, I didn't see it at the cinema and felt no urge to watch it for ages, but when I finally did and this little chap popped up on screen there was just too many feels!

Once EVE was introduced and the location of the film changed, we were back into family-friendly territory once again. The shift wasn’t subtle, and honestly I wished we could have been on earth longer, but the second half of the film was at least more of what I was expecting. The concept of these fat, immobile humans was humorous, but a little chilling at the same time. It’s certainly not a future that could be impossible in the real world. Yet another film that poses an actual possibility for future generations, terrifying!

Back to a lighter topic though, I really did enjoy WALL·E. The love story was beautiful and surprisingly emotional, and every time WALL·E pronounced EVE’s name wrong it brought a silly smile to my face. I was also super happy to spot the Pizza Planet truck without having to look it up afterwards, I love things like that. Ohh where was it in this? I can't remember if I found it or not it's been that long since I've seen it! It was really early on when Eve was first scanning Earth for live, the truck was one of the things she scanned :D
WALL.E really showcases what I love about Disney/Pixar films, they don't treat children like idiots.  They know that children of any age deal with situations like loss and love and also deal with the emotions that are tangled within these situations.  These types of movies bring those emotions to the surface and I think highlight to children (and adults alike) that emotions are normal and the world isn't all sweetness and light fairy tales like classic Disney movies (although I do still love those!).  On top of that there is some great animation work here and the background is so detailed, I loved looking around WALL.E's bunker trying to spot things he had collected.

All in all, this was a truly enjoyable film, and I’m still kicking myself for taking so long to watch it. I’m not sure it beats some of my favourites like Toy Story and Finding Nemo, but it’s definitely up there with the greats.  I don't know about but the look of the film from the outside didn't appeal to me, it was only when I watched it that I loved it.  Another case of not judging a book by it's cover....