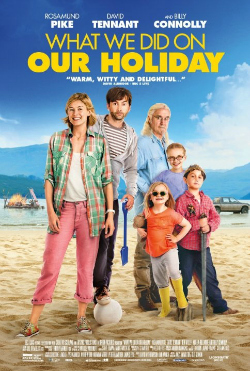 My IMDB Watchlist grows day by day as I explore the blogs that we follow and discover new films that I’d like to try. That’s the complete opposite of a complaint, but the only problem is I forget why certain films even end up getting on that list! On Sunday night, I needed something simple and lighthearted to watch to chill myself out, and although I’d forgotten everything about it, What We Did on Our Holiday sounded exactly what I needed.  I watched this ages ago and completely forgot to write about it, in fact when I saw this in our draft list, I actually thought I may have written this donkeys years ago and forgotten about it!!  I need to start making lists!!

This films tells the story of a real family holiday, without the Hollywood treatment. Doug (David Tennant) and Abi (Rosamund Pike) are taking their 3 children with them to Scotland to see their Grandad Gordie (Billy Connolly) for his Birthday, which they suspect may well be his last due his illness with cancer. As they pack their car and prepare for the drive from London, they explain the need for the children to keep their secret safe from the rest of the family.

Never before has a film won me over so quickly. I’ve been enjoying BBC films more and more with every one I see, but I can relate to these children so much it’s crazy. Let’s start with the youngest, Jess. She can be found trying to pack her pet rocks into her family bag, and gets flustered when her Dad won’t let her take them on the journey. I used to obsessively collect anything when I was younger, from stones to erasers, and still do now, although it’s Funko Pop figures now! Mickey has a wildly vivid imagination, and watches for too many programmes about vikings. He knows all about them, even how they deal with their fallen, and even believes that Odin watches over him.

I'm not so easily sold on BBC movies (or British movies for that matter) so it takes a lot for me to enjoy one but this really did get me.  Although, I kept expected something more to happen and it didn't.  This didn't take away from the overall film once I came to the realisation that it was one of those films (that I seem to talk about a lot of late) where nothing much happens but you enjoy it nonetheless.

I couldn't relate to the kids in the same way that Allie did but I recognised similarities between the kids and some of my younger family members.  I loved Gordie, in fact I generally love Billy Connolly but he was great in this.  I loved how the character brought the best out in the kids rather than constantly trying to get them to keep secrets or stop doing this or that. 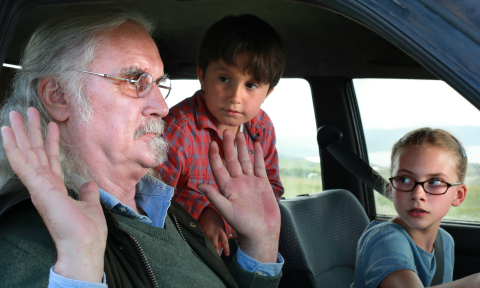 I might not have loved vikings as much as Mickey, but I had a wild imagination just as he did, and would often be found on the playground at school inventing all sorts of new games for my friends and I to play. Finally, Lottie keeps a notebook with her at all times. She writes down everything from lists to the things that upset her, especially when it comes to her parents arguing. I’ve been there, too.

It’s no wonder then, that I got so engrossed in this. It’s hilarious, and I don’t know how much was scripted with the children but some of their lines had me crying with laughter. It was also wonderful to see Rosamund Pike again, who I fell in love with in Gone Girl, and she’s slightly less crazy in this! 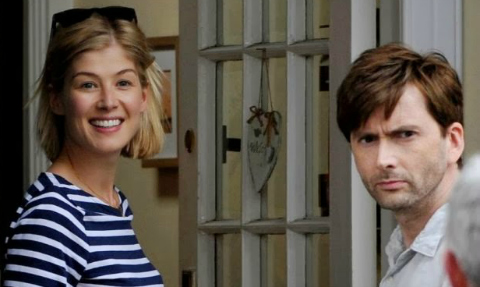 I don’t have children of my own (yet?) but I would say this is a must watch for any family. It’ll make you laugh just as much as it will make you misty-eyed, and if you can keep an open mind for the second half of the film, you’ll love it just as much as I did.