Okay folks, lets for just a second imagine that time travel is a thing. Now you're probably wondering what on earth time travel has to do with The Hateful Eight, right? The answer is nothing! It's just that my review found itself buried in our drafts list for 6 months, and most of it won't make sense now. So, cast your minds back, your fridge is full of leftover Christmas turkey and you're either still hyping about The Force Awakens, or desperately avoiding spoilers...got it? 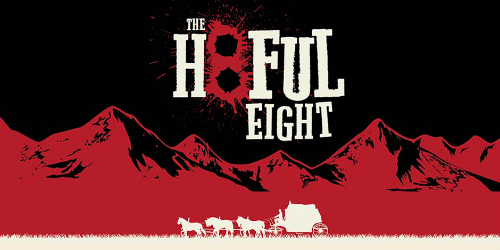 If you live in the UK, you’ll have no doubt heard about the drama Cineworld have created by taking the decision to not screen The Hateful Eight in any of their cinemas. The distributors chose the Odeon at London’s West End for their special 70mm premiere, and well, Cineworld threw a temper tantrum. They’ve spent too much time watching Kylo Ren, clearly!

Thankfully, my local isn’t a Cineworld, nor do I pay them monthly for their Unlimited card, so I’m safe, but poor Jenna does and last I heard she was boycotting this movie in protest! It’s started a great marketing campaign for the other cinema chains though. Showcase have offered their usual member discount prices for tickets to Unlimited card holders, and Vue just went out there and offered UNLIMITED popcorn to anyone watching The Hateful Eight!

Just to rub salt into the wounds, I wasn’t that fussed about watching The Hateful Eight, the runtime made me want to cry, but movies like this are best enjoyed on the big screen, so I stuck on my comfiest hoodie and fluffiest socks, and fought my way through the wonderful UK winter weather to Odeon.

The Hateful Eight is the story of 8 characters brought together in a haberdashery store to stay the night due to an awful snowstorm that has kicked up. Each character has their own reason for being there, and I’ll let them tell their own stories to you respectively when you watch it, because it’s all part of the charm of the movie. That first hour drags like a female dog, and I was grateful for being stuck in a cinema at the time because if I were at home I’d have spotted something shiny and stopped paying attention. 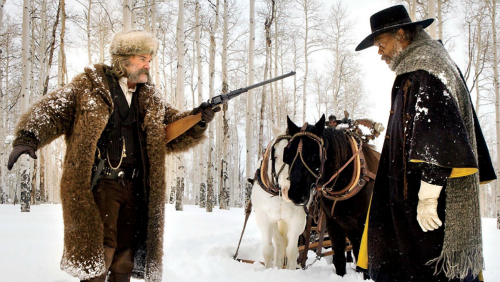 After the introductions though, a game of ‘who done it’ quickly surfaces, and that’s where The Hateful Eight really gets going. The whole cinema burst into hushed whispers to their movie-buds of who they thought was guilty at this point (Jenna you’d have hated it, I could picture you giving everyone your evil eyes!), and then the bloodshed started.

It would take forever to tell you about all the characters, but Samuel L Jackson’s character Major Marquis Warren was by far my favourite. I’m actually quite gutted he wasn’t nominated for an oscar this year, he fully deserves it for this. He goes from terrifyingly menacing to absolutely hilarious with a click of your fingers, it’s great. I don’t mean to be ‘that guy’ right now but is it just me or was Tim Roth channeling his inner Christoph Waltz in his role? Was Christoph Waltz offered the part and turned it down? 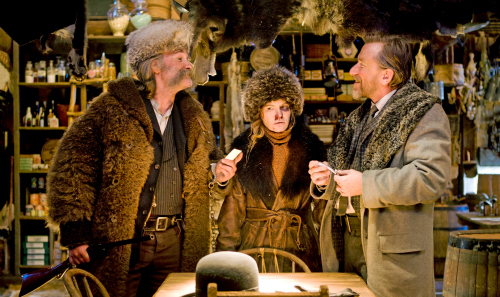 I think, when you go into a movie with low expectations, it’s much easier to fall in love, because I really enjoyed this, to the point where I can almost forgive how darn long it is! Sometimes it’s the littlest thing that gives you joy, but those moments where the whole cast is screaming about the door just cracked me up, and Samuel L Jackson has so many great one liners in the final chapter. I dare not type them out here however!