“From the makers of Sharknado”

A tagline that should make me and Allie jump for joy, not this time – just me!  Dead 7 is the next ‘so bad it’s good’ but this time with boybands!  One of my best friends sent me a text asking if I had heard of it and I hadn’t, how, I do not know!  Anyway, I got myself a cup of tea glass of wine and curled up on the sofa ready to see all my old boyband favourites in action.  Or not.  20 minutes in and I gave up, I really struggled to understand what the heck was going on and even the sight of Nick Carter couldn’t bring me back. 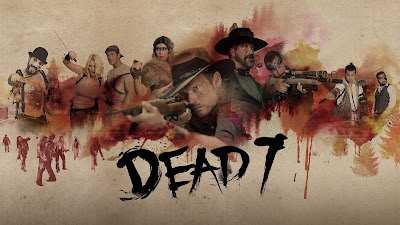 So what did I do you ask? Well I’ll tell you…I invited Allie to my house under the false pretense of a free dinner and then BAM! Its on the tele and there is nothing she can do about it.  My thought process was that we also tend to joke around and talk through movies so even if it is really bad we still enjoy it.  Admittedly, I realised pretty quickly that it was poor even with our running commentary, Sorry Allie!!

The fact that you were cooking for me should have set alarm bells off but no, and then the offer of a Gu dessert too...you really know how to get me!

Anyway, on with the review.  Dead 7 is set in the future where the world has been ravaged by zombies led by Apocalypta (Debra Wilson) and had reverted back to a Wild West style way of living.  After a recent attack on a small home town it is decided that action needs to be taken against Apocalypta, cue our seven heroes ready to save the world (or not!).  Jack (Nick Carter of Backstreet boys fame), Whiskey Joe (Joey Fatone of NSync fame), The Vaquero (Howie Dorough also a Backstreet Boy), Billy (Jeff Timmons the one no one knew from 98 degrees), Komodo (Erik-Michael Estrada from OTown), Daisy (Carrie Keagan not from a boyband) and Sirene (Lauren Kitt-Carter, married to a Backstreet Boy!!!). 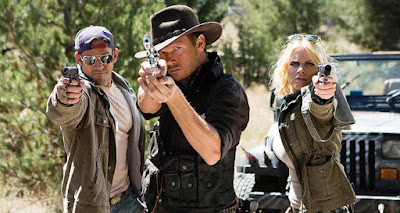 There isn’t much to be said about this, there was no obvious continuity errors which was a huge disappointment after Sharknado and the whole concept just seemed a little odd.  The outfits particularly made me laugh, it looked like they had all gone to the fancy dress shop and pulled out what they wanted to be when they grew up!!  We lost track of the storyline countless time and I’m still not sure of the story exactly.  One highlight was Johnny Vermillion (AJ Maclean, yet another member of the Backstreet Boys), Apocalypto’s henchman, he played the role really well and appeared to be the only boyband member who could actually act, so that was a welcome change from the rest of the cast.

I can totally buy the whole 'world has gone to pot, now we're back to the old way of living' thing but it really did make me laugh that all of a sudden everyone's wearing cowboy outfits! There's fun to be found in many terrible movies, as long as they're made just as badly, like Jenna said with the horrendous continuity errors in Sharknado, but it's like they really tried hard to make a good movie here which made it worse! 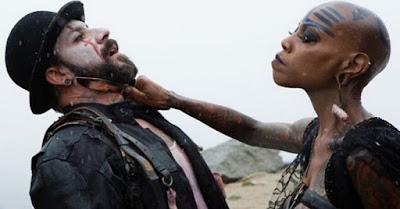 Honestly, I cannot explain enough how much I wanted to love this film but unfortunately I didn’t, it turned out to be so bad that it was just plain bad.  It only got this score because of AJ and I still might be pushing it!

Next time you offer me dinner and I suddenly come down ill...you'll know why!