When the hype kicked in before the release of The Martian, I vowed to locate a copy of the book and read it cover to cover, and then see it on the big screen. Only one of those things happened in the end. Ah, the best laid plans… To be honest, when I planned a cinema trip nearly 7 weeks after it’s release, I was surprised to see my local cinema was still playing it, I thought I’d missed it all together!  I too very nearly missed this one but luckily one of my local cinemas has over 30 screens so keeps movies on for longer than most...phew! 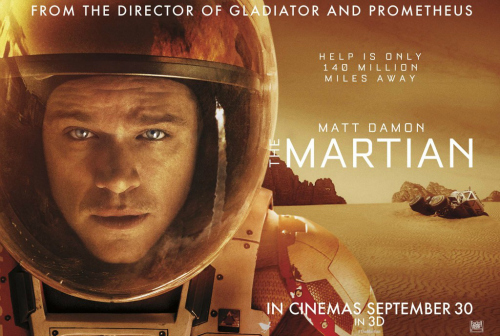 Before I try to write something that resembles a review however, let me first have a little cinema related rant. Yes, there was a group of kids/teens chatting or laughing at the back of the screen, to be honest, it was barely even audible. Certainly not enough to ruin the experience. What was annoying however, was the couple a few rows behind me shouting ‘Jesus Christ’ and ‘Shut Up’ every 5 minutes. They started this charade during the trailers! I wanted to turn around and explain the irony, but I knew I’d only be adding to the problem. Chill out, crazy couple!  I can sympathise with both you and the couple, my Dad barely hears anything in the cinema but I can hear every whisper and it drives me bonkers, so I wold probably be the couple haha!  Although, I do try to cause less disruption with my annoyance than the actual disruption.

Anyway, The Martian (2015) is based on a novel of the same name written by Andy Weir. After a terrible storm kicks up on Mars, the Ares III crew are forced to evacuate, but during their escape, Mark Watney (Matt Damon) is hit by debris and presumed dead. During the crew’s journey home to Earth, it is discovered that Mark is still alive on Mars, and so NASA must now perform the biggest rescue mission ever known.  Did anyone else think that maybe NASA wouldn't spend Millions probably Billions of Dollars to save one person?! (my Dads response to this comment was 'Well what else were they gonna do?' which I guess is kind of logical!) 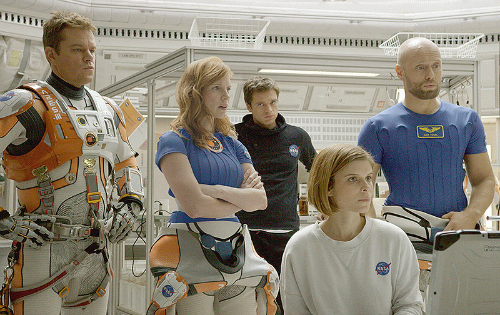 Watching Mark figure out how to survive out on Mars for as long as possible was absolutely fascinating to watch, if not a little gross at times. We all know what fertilizer is of course, but ew. I will also never take a bottle of ketchup for granted ever again. I wasn’t expecting The Martian to be so funny, either. Not that it’s a comedy or anything, but this line in particular was hilarious: “In the face of overwhelming odds, I'm left with only one option, I'm gonna have to science the shit out of this.”  My personal favourite was "I am the greatest Botanist on this planet".  The whole film had a real dry humour about it, it actually reminded me of typical British humour which felt great in a big Hollywood blockbuster!

Space movies aren’t my usual go-to movie of choice, and that’s mainly because I just don’t understand the science involved. For example, I felt like I enjoyed Interstellar, but man, I didn’t understand any of it. The Martian is different though. I got a little lost when the team at NASA were doing the calculations on how to rescue Mark, but for most of the time, I actually understood what was going on. Maybe that’s thanks to Mark himself for his crude and literal explanations of everything. 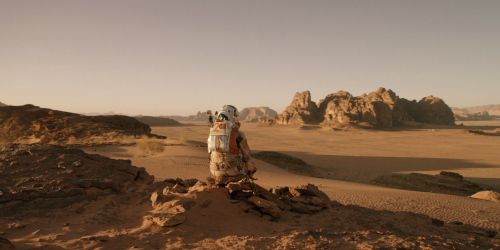 Although there were no crazy plot twists or dramatic love stories involved, I felt engaged from start to finish, although the run-time was a little long for a cinema trip for me. I need my pause breaks for long movies to get another cup of tea and a few biscuits! It was absolutely worth seeing this on the big screen though, the sets on Mars were simply stunning to look at.

I really loved this film, the humour helps to curb the sentimentality and moving from Watney surviving on his own, the rest of the Ares III crew on their ship and Houston keeps the pace of the film up really well.  In fact, when it ended I was so disappointed, I didn't want it to finish - I'm certain there is no requirement for a sequel but I will be keeping my fingers crossed!!

I should also mention the supporting cast, which contains quite a few big names and familiar faces. We don’t get to see much of them, but they keep the tension high and there’s a nice mix of series and comedic characters in there.  I loved Donald Glover, he's just cropping up everywhere at the minute, much to my delight!

The Martian will without a doubt be in my Top 10 for the year list, it was everything I hoped it would be. Now to make a start on that book!  Ditto!