Ah, it feels good to be back on the Blind Spot wagon! Earlier this month, Jenna and I watched Creed, and although we really enjoyed it, we both agreed we’d have probably found it better if we had any knowledge of the Rocky movies. So that’s how the original ended up on our Blind Spot list! If you fancy reading an abysmal attempt at us both trying to understand how boxing even works, check out our review of Creed here. 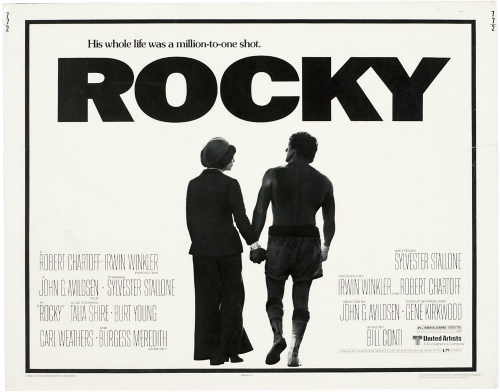 Rocky (1976) is the story of Rocky Balboa (Sylvester Stallone), a struggling boxer who works as a debt collector by day. When the undefeated heavyweight champion Apollo Creed (Carl Weathers) looks to set up an exhibition match to give a newcomer a chance at fighting him, Rocky, the Italian Stallion is chosen, and thus begins Rocky’s training and the wedding march ;-)

I’m just going to go straight out and say it. I wasn’t expecting to love this movie. I wanted to watch it, don’t get me wrong, especially after watching Creed, but all I was hoping to gain from it was an understanding of the story. I was engrossed from the first few minutes, and was kind of gutted when it ended, which is unusual for me, 2 hours is normally the point that I start to give up. 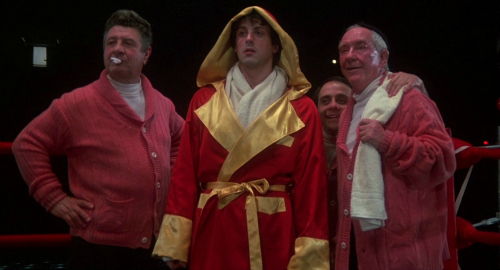 Rocky is such a loveable character! This is a guy who goes from using intimidation tactics to collect debts to dropping by a pet store just for the chance to spend a few minutes with the girl who’s captured his heart. What a guy!  I didn't expect Rocky to be the character he was, i expected this big ol' hardman that never lets up so to see him fall in love and be all romantic was a pleasant surprise.

Watching Rocky and Adrian’s (Talia Shire) relationship grow was definitely a highlight for me. It reminded me so much of Adonis and Bianca's relationship in Creed, they've obviously really taken note from Rocky when making Creed.  A completely clueless Rocky asking Adrian’s brother what she liked to do, and then spending $10 for just 10 minutes on the ice rink with her just melted my heart. I even spotted the line ‘Why do I fight? Because I can’t sing and dance…’ which was on Adonis’ shirt in Creed! Mega proud of myself there.

Like Allie, I didn't think I would be bothered by this movie but I really did love it.  I got very excited when I saw the 'Rocky' steps and even sent a photo to Allie.  In all honesty, I thought it would have ruined this film watching Creed first it had the same impact as if i had watched them the right way round.  I got so excited when I saw places in this that had been featured in Creed like Mighty Micks Gym.  I much prefer Stallone back in the day when I can understand what the heck he is saying and really loved the build up to the fight, I was adamant I knew what the outcome would be....I was wrong! 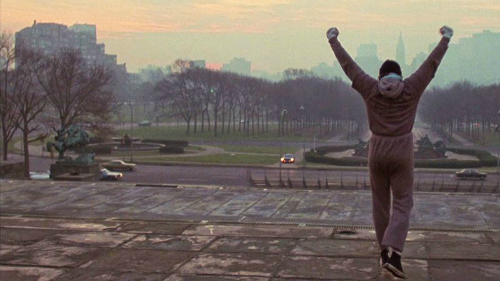 Then of course we had the famous music startup (which Jenna swears sounds like the wedding march, still does!) followed by Rocky running up the stairs which was nothing short of awesome. I can really see now why this is such an iconic movie! I was told it would really gear me up for going to the gym but I was in my pajamas finishing off a tub of chocolates from Christmas at the time so I can’t really comment on that.  I have been tempted to go to the gym of late, I didn't go after this however, I sat and ate a monster roast dinner! oops!

And then of course we had the final fight. Some of the tension was taken away from me because I knew the outcome, but when you watch a movie 40 years after it was released, I think you lose the right to scream ‘spoiler alert’ at someone!  Can you believe I didn't know how it ended, the movie has been out since before I was born and I have never heard a spoiler?!

I’m torn now between saving Rocky II for next year’s Blind Spot or just watching it next weekend…!

Great start to the Blind Spot challenge, here's hoping the other 11 are as good!