Every now and again, a movie comes along that takes me by surprise so much, that I just can’t stop talking about it to anyone who will listen, whether willingly or not. Throughout 2016 I’m trying to move out of my movie comfort zone, and watch movies that I would normally not even give a second thought. The Dressmaker just happened to be one of those. From the poster, it looked like a quiet, fashion-orientated drama, but I’d read some reviews that really sang it’s praises, and so, thinking there must be more to it, I gave it a shot. I’ll admit, Liam Hemsworth starring in it might have helped, too. 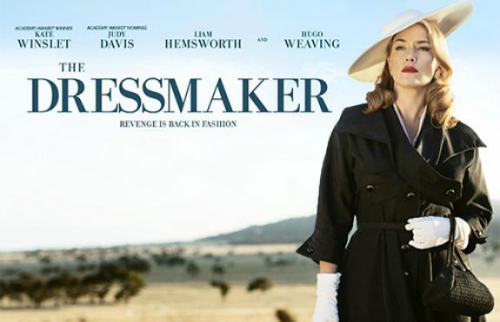 So, the plot in it’s most basic form is that Tilly Dunnage (Kate Winslet) is returning to her tiny hometown in Australia after being sent away as a child. After a stay in Paris among others, she is now a highly skilled dressmaker, and using these skills, she transforms the women in the town and seeks revenge on those who wronged her.

It’s so much more than that though! The Dressmaker is literally a drama, a romance, a black comedy, and a murder mystery all in one. That’s right, a murder mystery! You see, Tilly apparently murdered a boy when she was a young girl, that’s why she got sent away, but she doesn’t remember what happened. Some of my favourite moments in the movie are her scenes with Teddy (Liam Hemsworth), who helps her to remember what happened.  They were the best bits,  and not just because of Liam Hemsworth!

There are so many different elements to this film it was hard to keep up, one minute its a romance then its a thriller and a mystery.  It took some pretty dark turns throughout which kept me on my toes.  Following the Oscars this year, I am trying to look at more elements of a movie than just the plot and cast and one thing I have to mention on this one is the costume design, the contrast between the outfits they are wearing to start with and the ones that Tilly creates is amazing, as well as Sergeant Farrat's transformation from straight laced cop to matador!! 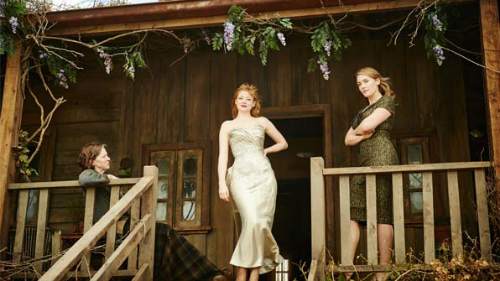 So, if that’s not enough for you, let me try this one on you. A cross-dressing Elrond. Seriously, Hugo Weaving’s character is absolutely brilliant in this, and he steals every scene he’s in. I think his first line was when Tilly steps out of her vehicle upon arriving home, and he says in shock and awe ‘Is that...Gucci?’. Just brilliant! Love that guy.  Wasn't he just the best, they could have revolved the whole movie around him and I would have loved every second.  Watching him dancing around draped in pink fabric was the highlight for me.

About half way through, there’s an amazing revelation about the murder which was so intense, and it was probably my favourite scene in the entire movie. Then it all twists in a completely unexpected way! I had no idea what was coming, I had to literally pause and rewind the movie to make sure what I’d just witnessed actually happened. I don’t want to say any more than that in case I put ideas in your mind, but my mouth was hanging open at that point. 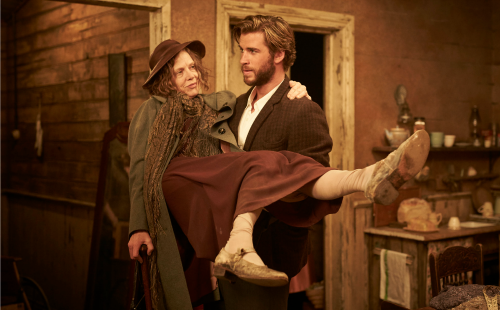 Of course, it’s not without fault, but I only really have two gripes. One being that the twist came just a little too early, as by the time I recovered from it all, there was still a big chunk of movie left. I’d have liked it to have ended whilst I was still feeling that shock. The other one feels mean to say, but Tilly is meant to be the same age as a lot of the other characters, and Kate Winslet was just too old for that to be believable. Gosh, it sounds even worse now that I’m typing it, but it’s true! I’m sorry Kate, I really, really love you.  I didn't notice that at all, I feel like I need to go back and check again!  Maybe I have my 'I Love you Kate' blinders on!

Anyway, I had such a blast watching this, and I’ll carry on recommending it to people. Don’t let that movie poster give you preconceptions like it gave me.  I had no idea what to expect, I had seen the trailer and the poster and I still couldn't put my finger on what type of film it was but I bloody loved it!

Did it remind anyone else a little of The Grand Budapest Hotel, the way it was filmed?