Ever since his character was ruined in X-Men Origins: Wolverine, I’ve been waiting for Deadpool to be done right, in his own movie. The Deadpool comics were the first ones I truly fell in love with. Turns out, Ryan Reynolds has been waiting longer than me, 11 years in total, I think. With that in mind, and after one of the most interesting, amusing and highly successful movie marketing campaigns of all time, I was terrified walking into the IMAX screen that my expectations were too high.

I have been a little bit AWOL on the blog of late due to work commitments. 14hr working days and restless nights do not a blogger make.  However, I what I didn't realise that I had left Allie's Deadpool post high and dry, I could have sworn I had put my rambling thoughts in but apparently not! Sorry mate!

Deadpool may have super-human powers, but he’s no superhero. Before his change, he was simply Wade Wilson, a shady character with questionable friends and companions. When he discovers he has cancer, and multiple forms, an offer to not only cure his illnesses but make him stronger than before becomes an offer he can’t refuse. It also starts a life-long grudge against a guy named Francis (Ed Skrein).

Straight from the outset, Deadpool was hilarious. The opening credits are just as funny, if not funnier than the closing credits of 22 Jump Street. Then we get thrown straight into the action shown in the leaked footage (which I think Ryan Reynolds himself has virtually confessed to) and the trailers, only much, much more violent.  I think I may have actually laughed from beginning to end of this film, opening and closing credits included! 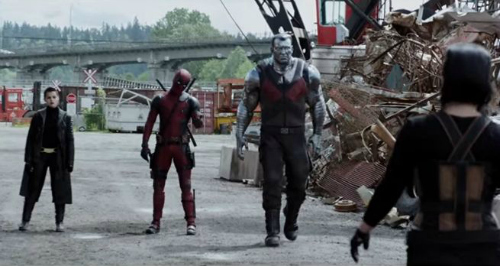 When you look at the movie as a whole, it’s really small, being almost a 50/50 split between current events and flashbacks. Deadpool could have easily been an hour and a half of pure comedy and violence, but there’s an origin story here with heart, that doesn’t feel like it’s been put there for the sake of it. It’s actually really clever, and comic book fans will love the pizza delivery scene. You’ll know it when you see it!  I don't get it :( you'll have to update me when I see you next!

The jokes come quick and fast, and they’ll please fans worldwide. There were some American references I didn’t understand, but poor David Beckham got poked fun at and there’s a brilliant Fawlty Towers joke in there too! it really is funny from start to finish, with a mix of crude, rude and downright offensive jokes, to my personal favourite moments, when Deadpool breaks the fourth wall. He pauses his own movie to fill us in on what he’s thinking, and forward winds bits we’ve already seen, which leads to a very gross moment when he forward winds too far. You’ll never look at a pair of Crocs the same way again. haha!

Ryan Reynolds was as awesome as hoped he would be, dark, dry humour and leaving no subject off limits.  I was genuinely terrified that they would hold back and avoid the really dark humour but they kept on pushing the boundaries.  They have no issue with breaking the fourth wall, taking aim at other Marvel/DC characters or even mentioning their real names in jest.  The plot wasn't the greatest but the comedy, narration and violence made the movie what it was, and I wouldn't have it any other way. 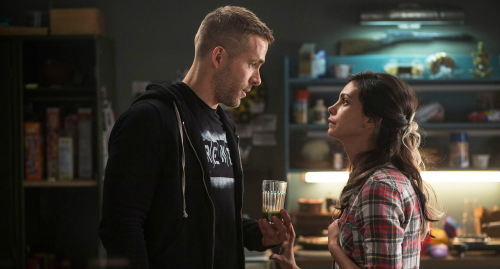 Let’s not forget Stan Lee’s amazing cameo. We were told to expect it in the opening credits, and I was consiously waiting for it for ages, and boy was it worth the wait! What a guy! I also loved the two X-Men characters involved, Colossus (Stefan Kapicic) and Negasonic Teenage Warhead (best name ever!!) (Brianna Hildebrand). They really added to the story and I hope we get to see them again!


All in all, this was everything I wanted Deadpool to be and more. Consider me a very happy fan. oh, and if you haven’t seen it yet, make sure you wait till the end of the credits!

This is the new number 2 in my superhero list (if you can consider it a superhero movie) and number 1 in my 'anti-hero' list.