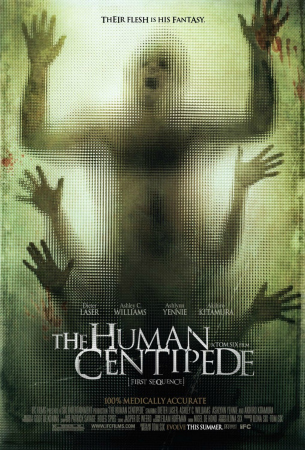 October is Halloweenie month here at Flick Chicks, the month that Jenna and I put on our big girl pants and force ourselves to sit through a few horror movies. You can read more about it in our announcement post here, and get involved if you’d like!

Why did I decide to watch The Human Centipede? My smart, blogger answer would be that I’d like to experience the full range of horror movies, from slasher to supernatural to gore, but I’m not even sure what category this would fall into. Torture? The real answer to that question is that I’m fed up of every TV show out there making reference to a movie I’ve never seen.  I have no idea why I watched this back when it was released, morbid curiosity maybe - either way I honestly wished I hadn't (and I enjoy a good gore film!!) This is just horrific!

I’m pretty sure everyone knows the plot to The Human Centipede. Some creepy guy kidnaps some people and sews their mouths to another person’s butt, thus creating a human centipede. What I didn’t know beforehand is that creepy guy has already done this with some dogs. Yuk.  The worst part about this is that his logic is that as long as he feeds the first one the rest will survive on the nutrients, and we all know what that means!!  Case in point, there was one scene that actually made me gag and I had to turn away to avoid losing my dinner! 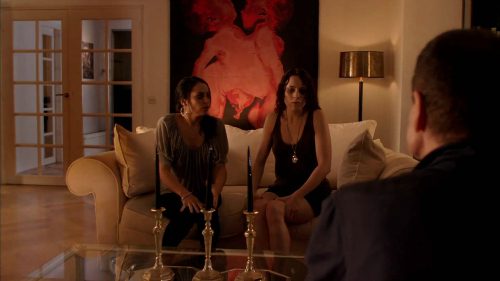 So the movie starts with what I come to expect from most horrors, some dumb people doing some dumb stuff. This time, it’s two American girls on vacation in Germany who get themselves lost in the woods, and then accept ‘creepy guy’s’ offer of shelter from the rain whilst he calls for help. Life pro tip here, don’t accept a drink from a stranger, especially when you didn’t see them prepare it.  General life tip, rain does not hurt you, man with medical equipment in his basement does!!

What I hate about horrors is the suspense. I hate waiting for that jump scare that I know is coming, because it makes me jump anyway. It always happens the same way! Why do houses in these movies have whole walls made of windows, with the curtains drawn? I know you’re going to pull that curtain back. I know there’s going to be someone on the other side waiting for you and - DAMNIT, I knew it and I still jumped.

There was only really that one jump scare, and the rest of the movie was just kind of gross. I should have known better. Still, I couldn’t help but laugh when one of the girls got on creepy guy’s bad side by trying to escape. Of course your punishment is going to be becoming the middle of the centipede! Duh!


I can't say I remember the jump in this one, I just remember the ending where they just topple over, I felt so bad for the woman in the middle but I couldn't help but laugh (Yes I am a horrible person!).  I feel like this film would have been a whole different experience if me and Allie has watched it together, we would have shouted at the screen and talked over the particularly horrid bits. It would have been a bit more Sharknado and a bit less ewwww!

Has anyone watched the other two Human Centipede movies? I can’t believe they actually made more, but we're on the 4th Sharknado movie, so there’s that.  I knew there was another one, I didn't know there was two more, do we even want to go there? We really don't, but The Human Centipede didn't scar me for life unlike It Follows!

I'm not sure I can rate this out of 10, it wasn't a badly made film but the story was cooked up by someone super cray-cray and the outcome was just gross...how does one quantify that?!
Posted by Unknown at Friday, October 07, 2016
Labels: 2009, Akihiro Kitamura, Ashley C Williams, Ashlynn Yennie, Dieter Laser, Halloweenie, Horror, Review, Tom Six