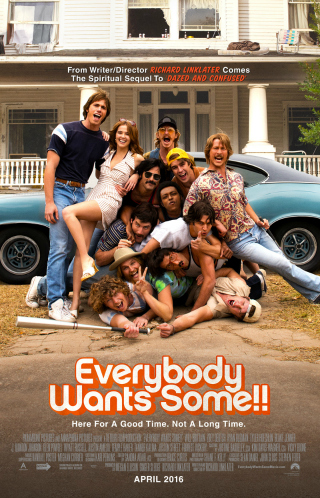 UPDATED POST with Jenna's Review: So, I have a lot of apologising to do. Last year when Boyhood stole the glory that I thought Birdman deserved, I had a grump and kind of swore off any Richard Linklater movies. School of Rock was the only movie of his I’d actually seen, but when I hold a grudge I put 100% into it, so I told myself I wouldn’t watch any more than that. I hear nothing but praise for the Sunrise/Sunset/Midnight trilogy, and I know Dazed and Confused is a cult favourite, but I had a grump on me. So when the trailer came out for Everybody Wants Some (2016) I grumbled some more. I didn’t find it funny, and it had ‘he who must not be named’ attached to it, so I was going to avoid it like the plague.

But, y’no, curiosity killed the cat, and every review I read upon it’s release was not only positive, but absolutely singing it’s praises, so I sucked up my pride and went out to see it.  I didn't think about it nearly as much as Allie, I saw Allie's review and popped it onto my 'to watch' list and only just got around to actually watching it.

It’s hard to explain the plot, because there isn’t one, really. The movie starts with Jake (Blake Jenner AKA that guy from the later seasons of Glee) arriving at a college house that he’ll be living in three days before classes start. Jake will be sharing the house with the rest of the school’s baseball team. After introducing himself to the guys, he goes out with a few of them to rustle up some girls for a party they’re going to throw that night, despite the fact their coach has given them only 2 rules. No alcohol in the house and no girls allowed upstairs. Safe to say, it’s not long before both of those rules are broken. 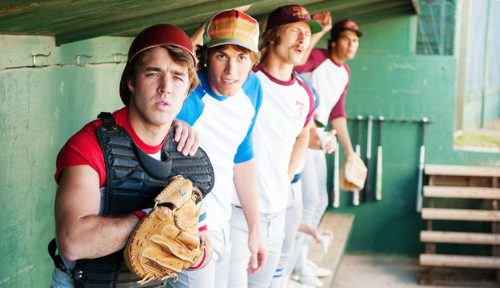 From that, the rest of the movie moves from one party to the next, with a separate plot of Jake chasing after Beverley (Zoey Deutch). It’s fun filled from start to finish, with raunchy moments, booze, short shorts, baseball, booze, moustaches, drugs, ping pong, booze, cowboys, the occasional fight, and did I mention booze? I don’t know how I got so engrossed watching these characters that normally I would find so annoying. I found myself laughing at nearly everything Finn (Glen Powell) said, and I was waiting (not so) patiently to see whether the guys were right, whether Beuter (Will Brittain) would ever return after finding out his girlfriend might be pregnant.  I should have realised before watching that this was a Richard Linklater films and he likes the types of films where nothing really happens, but I just kept getting this feeling that something bad was going to happen.

I was convinced someone was going to get injured before first practice or they were going to get caught having a party in the house or someone was going to die from drugs and then the film just ended.  I did really enjoy the film, I feel like I want to watch it again without the 'edge of my seat' panic about someone dying/being injured/getting caught.  I wasn't ever bored and the film flew by - I loved all the various outfits as they attended different style clubs, disco to country to punk.

What I loved the most about Everybody Wants Some is how natural it felt. I’ve seen plenty of college comedies, they rely on d!ck jokes, fart jokes and naked women to get their laughs. Don’t get me wrong, I enjoy most of those comedies, but this just feels more real. I found myself laughing with the characters, rather than laughing at event unfolding, it’s kind of hard to explain. Of course, I wish Beverley wasn’t the only main female character, but I can forgive that. 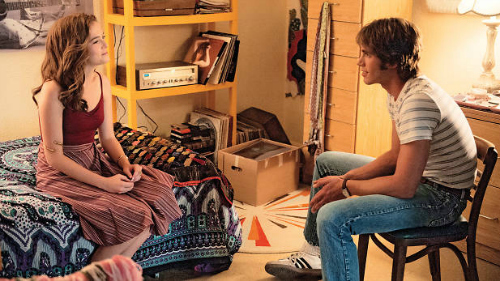 I’ll definitely watch this again soon, it’s one I’m trying to recommend to friends and family right now. There’s still a lot of 2016 to go, but there’s a good chance this will be in my Top 10 of the year.   I don't think this will make my Top 10 but I'm not sure yet, I feel like I should have more idea of what my top 10 will look like with less than 3 months to go but hey ho!

So, Richard Linklater, consider this my formal apology for being a grump, I’m cutting myself a nice big slice of humble pie right now and I’ll go enjoy it in front of the TV later when I watch Dazed and Confused. I’m still not convinced Boyhood will be better than Birdman, but I’ll give it ago, for you.

Apparently, this is the 'spiritual' sequel to Dazed and Confused so I feel like I really need to give that a go now.

Oh, and I have to know? Is that Space Invaders trick for real?!  I really want to know this!