Happy Halloween folks! You’ve probably noticed it’s been looking a little...purple here lately at Flick Chicks. Jenna’s taking a break from blogging as she’s struggling to find the time. I hope she’ll be back, but for now, I hope you don’t mind sticking around with just me for a while.

Moving swiftly on, October has been Halloweenie Month, and although I didn’t watch as many horrors as I’d hoped, I’m still pretty darn proud of myself! If you’ve missed any of my Halloweenie Posts, here they are for you: 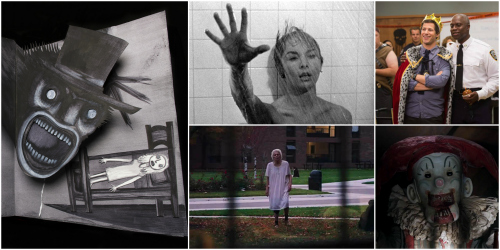 It’s been a quiet month for cinema trips, there haven’t been many ‘must watch’ releases, but I did catch The Girl on the Train, and Doctor Strange in IMAX, which was well worth the extra money, I have to say. I’ll post my review of the latter as soon as possible for you guys. In between all the scary movies I did watch some more of my usual kind of movies, and if you missed any of those reviews you can find those here:

As far as TV goes, I was super excited to see that a release date for Sherlock Season 4 has finally been announced, New Year’s Day! I’ll be going to my parent’s house to watch that with them. Boy, it’s been so long I’m going to have to have a catch up over Christmas, because I honestly don’t remember how it all ended. Speaking of ending...last week brought the final of The Great British Bake Off, which basically crushed our whole country. The show moves to another channel next year, which led to judge Mary Berry and presenters Mel and Sue dropping out. It’s the end of Bake Off as we know it! Fingers crossed the BBC creates a new show.

I’ve started watching Westworld too, and managed to fall behind on it already. This show is so good so far, you guys. I’ve never seen/read the original (Movie? Show? Book?) so I have no idea where any of it is going, but it’s just so well made. I’m loving all the crazy theories flying around.

Finally, I wanted to share a few posts that I’ve loved reading this month from my fellow bloggers. Check these guys out if you don’t follow them already!

Dell at Dell on Movies has been celebrating all things horror this month, and introduced me to Scouts Guide to the Zombie Apocalypse.

Brittani (I triple-checked this month!) at Rambling Film reviewed a movie I'm not sure I'll ever have the guts to watch, Hush.

Keith at Keith and the Movies reminded why I still really need to see Cafe Society.

Sati at Cinematic Corner has been recapping Westworld for us. I'm behind on her posts because I'm behind on the show - but I'll catch up!

Rebecca at ThePunkTheory shared with us all her Top 4 Scary TV Shows, of which I've only been brave enough to watch 1.

m.brown at Two Dollar Cinema always writes fantastically amusing reviews, but my favourite of his this month was The Jungle Book.

Last but certainly not least, check out Ruth's blog FlixChatter for all the latest coverage of Twin Cities Film Fest.
Posted by Unknown at Monday, October 31, 2016
Labels: 2016, Halloweenie, Links, Round Up