This month brings something a little different to the blog. Even as the grown ups we are, we both still enjoy animated films and review them frequently on Flick Chicks, but this is the first time we’ve reviewed an anime film! I was a huge anime fan in my teens (Bleach and Dragonball Z were my favourites) and although I saw Spirited Away years ago, I hadn’t ever watched My Neighbor Totoro.  I however, am a newbie, this is my first anime experience so bear with me ;-)

My Neighbor Totoro is a magical children’s film following the story of two sisters, Satsuki and Mei, who have recently moved house with their Father to be closer to their Mother who is currently ill in hospital. From the first few minutes, the girls discover magical ‘soot sprites’ living in the house, and whilst adventuring, they also come across another magical being, Totoro himself. 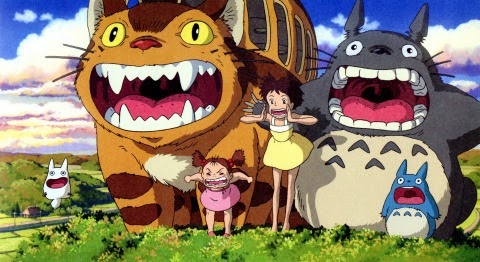 What exactly is Totoro? I had him down as a cross between an owl and a bear before watching the film, and then Jenna pointed out he has several rabbit features too. I didn’t expect him to be so loud! He’s still very cute, stood in the rain with his umbrella. Admittedly, it was seeing Totoro’s cheesy grin and his soft belly in every geeky shop I’ve ever been in that made me want to watch the film itself, and I definitely want my own one now! I also want a cat bus, cat bus looked so comfy!  He looked so cute and you expected him to have the sweet soft voice and this great roar pours out of him and suddenly you realise, maybe anime isn't just your everyday kids cartoon! Cat bus scared me, I'm not going to lie, I don't like animals at the best of times and this is a GIANT CAT!!  Nope nope nope!!

I think sometimes it’s too easily to be really critical when reviewing a film like this. It needs to be enjoyed for what it is. One could complain about a slow start, a lack of ‘a moral to be learnt’ which most children’s films have, but to just sit back and take in the story, it’s beautiful. It’s all about family, and friendships, and believing in magic.

Anyone can say there no lessons to be learnt but after stewing on it overnight it really hit home for me.  These children and in the middle of dealing with the possibility of losing their mother.  There lives could be downtrodden and miserable and they could spend day after day crying and missing out on so much of their childhood but no.  Their Father (although works a lot) spends his time with his children, making them laugh and telling them magical stories that their imaginations bring to life in the Totoro, Soot Sprites and the cat bus.  There coping mechanism for this very scary and real situation is to be children and jump in puddles, get dirty and imagine a magical world where they can forget the 'grown up stuff' for a while.  My Mother was ill for most of my childhood but it was never sad, I never even realised what was happening, my childhood was filled with laughter, parties, mud pies, cake making, singing, shopping trips, face paints, dancing, Happy Meals, play houses and tooth fairies.

Maybe there is a lesson here but for the grown ups rather than the kids :-) 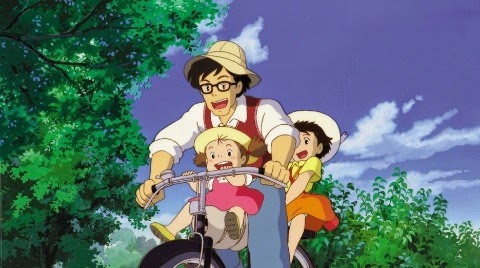 We watched the English dubbed version with the Dakota twins providing voices for Satsuki and Mei, as we were both too tired for subtitles, but I’d like to watch this again sometime soon as it’s meant to be viewed, just for the experience.  Apparently, after reading the trivia for this there are a few differences between the original Japanese version and the English dubbed version, mostly due to language changes.

All in all, I enjoyed this more than I thought I would, and my appreciation grew for it overnight. Definitely a film I’ll see again soon, and a film I’ll keep back for any future children I may have. Now I’m tempted to see another film by Studio Ghibli...does anyone have any recommendations?