Picking a movie as my ‘Looking Forward to this Month’ choice each month seems to put some kind of curse over it, meaning I don’t even get to see it at the cinema. How does this keep happening?! Hail, Caesar was my choice for March, and I think I had 3 different occasions planned to see it, all of which got cancelled on the day. 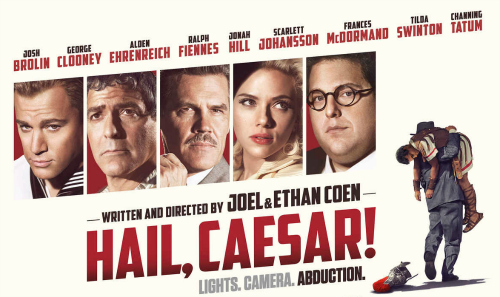 I’ve been excited for this since the trailer first came out last year. I think I was on a bit of a George Clooney hype, and the addition of Channing Tatum was too much for me to take. Then I watched (and loved) Inside Llewyn Davis and decided from that point I was a Coen Brothers fan. Still haven’t sat through the whole of Bridge of Spies, though…

So, the plot is fairly simple. This movie is about a guy who makes movies! Eddie Mannix (Josh Brolin) runs the joint, and spends every living moment of the day solving problems within the studio. Things go a little more pear shaped when his leading star Baird Whitlock (George Clooney) goes missing.

I think even if you didn’t enjoy the movie itself, you have to appreciate how beautiful it is to watch. If the film world in the 1950’s really is this colourful, then sign me up! It’s greatest strengths are ultimately its greatest weakness, sadly. A lot of the movie is filled with snippets behind the doors of different sets. We see Scarlett Johannson put on an incredible synchronised swimming act, and Channing Tatum dressed as a sailor, dancing on tables. I mean come on, what more could a girl want? The only problem is that most of these acts have nothing to do with the plot of the movie at all. 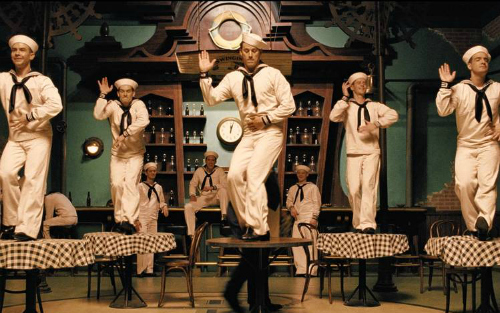 That sounds harsh, especially when I really enjoyed watching Hail, Caesar! It’s just that I hyped it up so much in my head, I was thinking of placing it next to Fargo on my hypothetical shelf. And it definitely doesn’t deserve a place up there. Although the twist is takes is unexpected, it takes a weird, political turn that kind of bored the pants off me. I don’t do politics. Or history. Sorry.

By far, the star here was Hobie Doyle, played by Alden Ehrenreich, as the young actor, famous for his Westerns, that is suddenly thrown into a highbrow drama, directed by the ever patient Laurence Laurentz (Ralph Fiennes). Would that it were so simple...It doesn’t matter how many times I watch that scene, it will be hilarious every single time! I heard Alden is in the running for playing a young Han Solo? Don’t let Jenna know but I think he would be great!

All in all, and despite sounding negative, I really did enjoy this. I was just my own worst enemy and hyped it up too much. It’s not the best Coen Brothers movie out there, but as a fan of quirky humour, this was definitely my cup of tea.