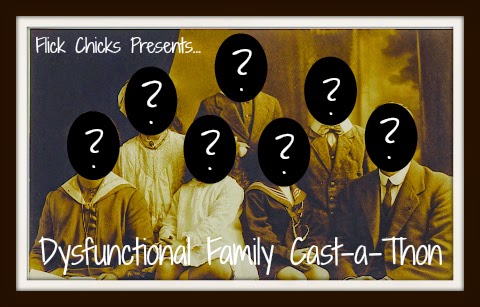 I actually got this idea after doing the awesome Slasher Cast-a-thon hosted by the amazing Dell on Movies back in October and watching This is where I leave you, involving a family dealing with death of the patriarch in the most dysfunctional ways possible (review to follow at some point).

Anyway, as always there are rules but they are simple:

1. Build a cast for your dysfunctional family from movies ONLY.  You can have as many characters as you like but you must include the following:

They don't necessarily have to be in the named role in their original movie (i.e. the character doesn't have to be a mother figure in their movie to be chosen as the inappropriate mother) however you do have to explain your reasoning behind your choice.

We will as always (at some point) contribute ourselves to this masterpiece but until then we would love to hear your ideas for the most dysfunctional family in movies.

We also know that everyone is busy busy so we like to give you all a looooong lead time so we get the most amount of posts in by the deadline (then we end up waiting nearly 2 months before posting the round-up oops!!).

So the deadline for this one is Friday 27th February but we are very flexible over here at Flick Chicks so if you miss the deadline, post anyway we'll add it in :-)