I try and stay away from critic reviews before I go and see a film because I like to judge things myself. However, every now and again my curiosity gets the better of me and I sneak a look. I got put off Pompeii because of bad reviews, but my brother really wanted to see it, and as a Flick Chick, I feel as though it's my duty to never say no to a film!  I hadn't read any reviews but I knew it had had a bad hit from the critics so I wasn't expecting too much, maybe my low expectations meant I enjoyed it more. 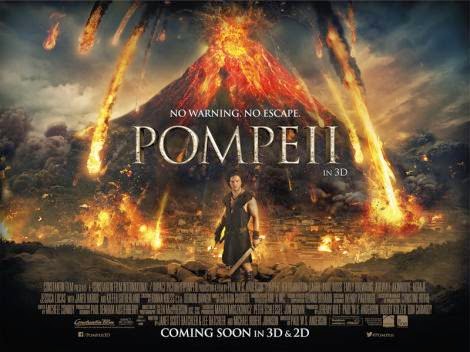 For those who know and enjoy history, forgive me but I knew nothing about the city of Pompeii for Mount Vesuvius before this. Pompeii tells the story of Milo, whose family and tribe are slain by Romans when he was a child. He is taken as a slave, and becomes a gladiator at Pompeii. There, he falls in love but disaster strikes when the volcano erupts.
This started a little slow, and the first few gladiator scenes just reminded me too much of the TV Show Spartacus, and well, nothing will live up to that and so I got a little distracted. However, I don't remember what point changed things for me but I thought the second half was fantastic. I really wish I'd seen this in 3D because the volcano section would have been brilliant.
Sure it's pretty cheesy in places and there wasn't much character or love interest development, but I couldn't think of any scenes that could be cut to help that, nor do I think the film should have been longer. It actually reminded me of Titanic to a certain degree, though I may have put some readers off completely with that comment!
I spent the entire film racking my brain for where I knew Cassia from, as soon as I opened IMDB to find out it came to me, she was in Lemony Snicket's A Series of Unfortunate Events, which I didn't actually like her much in so I'm glad I didn't figure it out during the film as it may have clouded by judgement.

Here's a snippet of one of the coolest action scenes...
﻿

The action scenes were awesome, I found myself enjoying the fight scenes in the arena more than the volcano scenes.  The scenes during the eruption were a bit too chaotic and made it difficult to identify what was actually happening.

Kit Harington and the rest of the cast did an amazing job, and I was pleased in myself that I could watch Kit running around as a gladiator without picturing all those black furs, nor was I waiting for someone to tell him that he knows nothing! Sorry, Game of Thrones fan here...

Kit Harrington was the highlight, that man in beautiful (I think I might say this too often on this blog!) and I loved  Atticus, although I'm not sure how believable it is that when you are a gladiator you gain allies.  I would guess it's more of an everyman for himself type of situation but I also don't think anyone can outrun a volcano for 20 minutes on a horse!!  As Allie said, the character development was pretty limited but that didn't make it any less enjoyable for me, I was gripped from beginning to end. You should definitely watch the TV Show, Spartacus. It's more of a brother-hood than a friendship.

My verdict is to give this film a chance, because you may find yourself pleasantly surprised like me.

I think this is officially a guilty pleasure for me, I really enjoyed it and as you will know by now I always enjoy a good love story.