Date night! This might be the first movie Jenna and I actually watched together at the cinema THIS YEAR. Is that right? What did we actually watch together last?  Urm I think you might be right, I don't actually remember the last time we went!

Anyway, I do love our cinema trips. They almost always involve a cheeky Nandos, and I get a free ticket thanks to those delightful meerkats and Jenna’s Cineworld card. I did not approve of the life size, all too real Idris Elba cutout in the foyer that terrified me every time I looked it. So mesmerising at the same time, though… This feels like the ideal time to mentions Allie's joke about Idris' elbow....you may have had to be there! Did you actually hear that? I can't help calling him Idris Elbow but I thought I only got halfway through that sentence before the cardboard version of him terrified me! 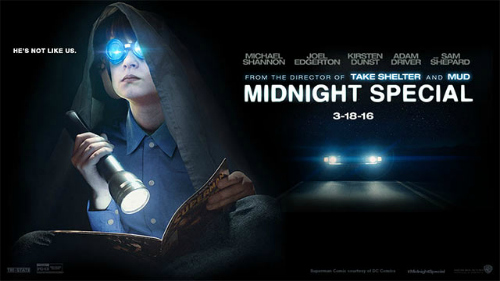 On to the movie! I don’t want to tell you too much about the plot of Midnight Special, because it’s one of those that’s better the less you know, but this is what I could tell from the trailer and the summary on IMDB. A young boy named Alton with mysterious, special powers (Jaeden Lieberher) is on the run from the government with his father (Michael Shannon). That really is all you need to know. That, and the fact that this is a Sci-Fi movie.

It’s got one of the greatest openings to a movie I’ve seen for a long time. The logos of the production companies are still being played, but you can hear a news report in the background giving an amber warning for a missing child, kidnapped by a man named Roy (Shannon). Quickly we realise we’re in the motel room occupied by Roy, Alton and a friend of Roy’s, Lucas (Joel Edgerton). In the middle of the night, the three leave their room and drive at speed through the night. 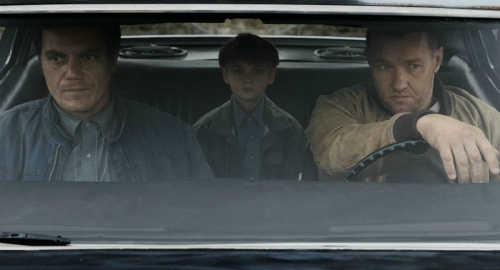 Right from the outset, my mind had questions floating around. Who is Lucas? Why are they on the run? Where has Alton been kidnapped from? As the movie creeps along, most questions get answered, but more crop up constantly, and that’s one of the greatest things about Midnight Special. It leads you on at a relatively slow pace, but keeps you guessing throughout. Just when your mind has caught up, it picks up pace again and gives you a fresh batch of thoughts. It also made me jump pretty badly, twice! I’d actually only started trusting the movie again when it got me the second time.

I am struggling to put together any kind of coherent review for this film.  One thing I will say is that I'm glad I completely forgot the trailer, going into this with an open mind is kind of the only way to watch it.  It's a slow burner that's for sure, refusing to give away anything but the bear minimum of information and building on that.  I think it was nearly 30 minutes before they confirmed that one of the men 'kidnapping' this boy, was actually his father. Had they have provided all the information as we went along I don't think I would have been as engrossed as I was, i was constantly waiting for the answer to a question which inevitably posed a new question!

The performances are great all round. I only really discovered Joel Edgerton last year in The Gift, and his role here was completely different. I’m looking forward to seeing more of his movies. Michael Shannon is an actor I’ve seen very little of also, and he was the star in this one, saying more with his expressions and body language than he did with actual words. I felt Kirsten Dunst was a bit wasted, personally, but maybe that’s because I wanted to know more about her past, and didn’t. Adam Driver was everything I wanted him to be, playing a more serious role than I’m used to seeing him in, but with the right amount of awkwardness for it to still be him.

I was really impressed with Shannon (i'd expect nothing less), Edgerton (no idea what to expect) and Driver (if I said I didn't like him Allie would cut me out of her wedding!). Lieberher did a really good job of playing someone smarter than all the adults around him but still providing a vulnerability that made you want to just hug him.  Don't get me started on Dunst, I don't like her, this had not made me like her anymore.  In fact, I think the whole film could have been just as good without that character entirely. 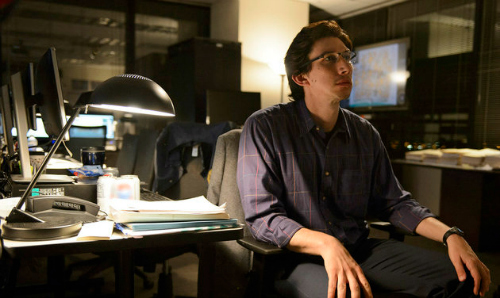 I want to keep this spoiler free, so I won’t discuss the ending, but afterwards, Jenna and I both agreed we needed to sleep on this one before we knew how to feel. I thought about it the whole drive home, stayed up far too late reading into it, and spent my break at work telling a colleague about it. I love movies that do this to me! When I started writing this, I’d told myself I was giving Midnight Special an 8, but actually putting my thoughts into words has made me realise I enjoyed this more than I thought I did.

It took me four days to work out how I felt about this and how to put that into words.  It's slow paced, providing enough tension to keep me on the edge of my seat without having to resort to excess CGI and huge set pieces.