This will be Flick Chicks first Blogathon and I couldn't be more excited.  This was set up by Katy from Girl Meets Cinema as a way to 'spread shameless love for the B-Movie awesomeness' and that it is doing. 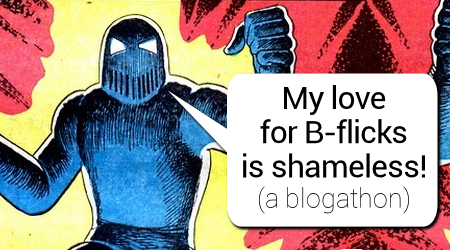 I really love these blog challenges, they prompt me to try something different or watch a film again that I haven't seen in years.  This did just that.  My film choice is the 1990 film Tremors with Kevin Bacon, Fred Ward and Finn Carter. 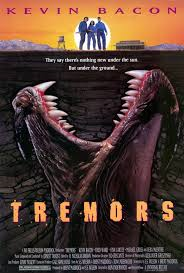 I had forgotten all about this film until I saw it in the Blogathon list but it is not only awesome but it has sentimental value for me too.  This was mine and my Dad's Saturday afternoon movie, we watched it all the time on VHS (I don't think my Mom could stomach it so went to the kitchen to bake or clean!).  Then when the film finished I would play 'Tremors' in the living room, jumping from furniture to furniture to avoid touching the floor.


This scene truly terrified me and I never went on a pogo stick again (and don't think I ever will).  My favourite characters by far were Burt and Heather Gummer played by Michael Gross and Reba McEntire and their insane armoury under their house.  Unfortunately, the monster work wasn't great but I don't think that takes away from this film at all, its less about how scary the monster and more about the tense will it or wont it hear us.  It has all the tension of Paranormal Activity but with an interesting storyline.

I may now watch this film the weekend, probably with my Dad an I will probably play 'tremors' after just for nostalgia.

It's so exciting to be part of a Blogathon! I'm looking forward to reading everyone else's posts once they're posted too. My film choice just had to be Mars Attacks. 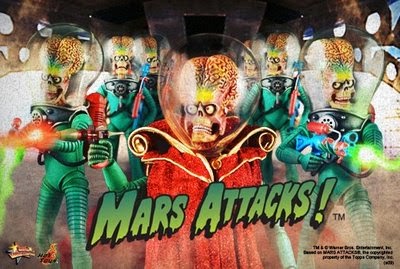 I think I was about 9 or 10 years old when I first saw this. I was staying the night at my Grandparents' house and was doing my usual 'I can't sleep I'm hungry' routine. My Grandparents had just put this film on, and apparently I assured them that I wouldn't be scared and was adamant that I watched it.
Needless to say, it terrified me and I didn't sleep at all that night! At the same time though, I loved it, and I still don't know why. I ran around the house making that alien sound, with my hands in a gun position. I bought the VHS of it, and even convinced my brother who is 5 years younger than me to watch it, but he ran out of the room crying at the cows on fire. I actually think I instilled a fear of cows into him...
Whilst writing this post, I have the biggest urge to watch this film again just for those childhood memories! Maybe I'll invite my brother over...﻿